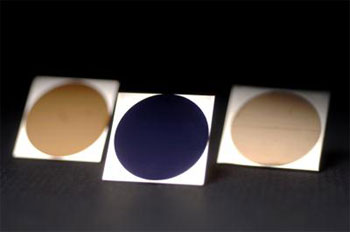 In 2006,  U.S. scientists announced the first step to a perfect, pitch-black Batmobile for the hero of The Dark Knight. Using lasers  (or more accurately, a quick beam of light called a femtosecond laser pulse), scientists discovered a way to alter the surface properties of metals and improve their ability to capture radiation, rendering  each metal  the deepest possible shade of black. This idea offers  applications for fuel cells, sports cars and numerable other objects. And now, the idea has evolved.

Now, scientists can turn metals gold, blue or almost any other color  through these laser applications. “In a feat of optical alchemy, Dr. Guo, a professor of optics at the University of Rochester, and Anatoliy Y. Vorobyev, a postdoctoral researcher, use ultrashort laser bursts to pockmark the surface of a metal in a way that is not perceptible to the touch but that alters how the metal absorbs and reflects light,” the New York Times reports. “The result is that pure aluminum [or tungsten or any other metal that Dr. Guo tests] looks like gold, and the appearance is literally skin deep.”

In fact, many experts can hardly tell the difference. With gold futures that rose to $963.70 per ounce on the New York Mercantile Exchange this Monday, this could be a cheaper method for gold madness, as long as you don’t look beneath the surface. Unlike gold, aluminum futures fell to a five-week low this Friday at $3,014 per ton. Tungsten, another metal that benefits from Dr. Guo’s Midas Touch, has witnessed a cool stream of steady prices. Tungsten prices  aren’t expected to rise this summer, even with a sluggish output from China.

According to the New York Times, “Dr. Guo imagines a kaleidoscope of potential uses [for this latest discovery], from the practical (a reflective filter) to the whimsical (etching the family photograph onto a metal refrigerator door, for instance). Another possibility is custom colors for bicycles or cars, without the need for any paint … Ã‹Å“It’s pretty robust, because it’s right on the metal, and it’s not going to peel off,’ Dr. Guo said.”

With the rising cost of precious metals, jewelers should find the effects of these  lasers particularly interesting. Jewelry from these gold “substitutes” could make an appearance soon, and Dr. Guo has received several calls from jewelers interested in making colored jewelry in laser-created shades such as blue.

PREVIOUS POST:
Why Care About the Doha Round of Trade Talks?
NEXT POST:
Is the LME's Steel Billet Price A Leading Price Indicator?