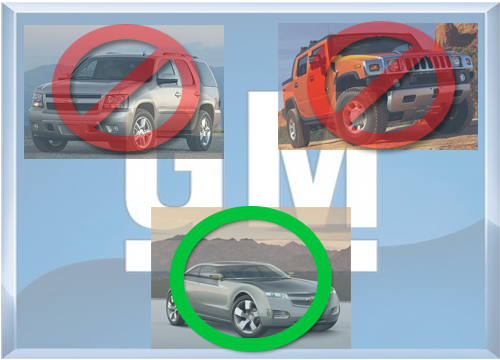 “The cuts bring GM’s total production cuts to just under the 300,000 units company officials had hoped to cut this year … GM also is looking at the possibility of idling production at other truck and SUV plants later this year to further align its offerings with consumer demand,” AP Business reports. These production cuts bring with them employment cuts, as plants in Louisiana and Ohio report the loss of approximately 1,760 workers.

“To meet the lowered target,” Earth  Times explains,  “GM told workers on Monday that it would cut a shift at the Moraine, Ohio, plant, which makes the Chevy Trailblazer and GMC Envoy SUVs. The move will mean layoffs for about 1,000 production and salaried jobs at the plant, now scheduled to be closed by 2010 … The Shreveport, Louisiana, plant makes the Hummer H3 SUV and the Chevrolet Canyon compact pickup and will also lose a shift. That move will cut about 760 jobs.”

Part of a widespread effort  that includes the possible removal of the Hummer brand, these cuts reflect plans to meet a lower output target. GM sales in the U.S. dropped about 15 percent during the first half of the year, but GM Chief Executive Rick Wagoner hopes to improve results during the next 18 months. Earlier this month, he shared his ideas for a “restructuring package” which would cut costs by $10 billion by the end of 2009.

Similarly, Toyota Motor Corp. plans to focus production on smaller vehicles and smaller models. “[Toyota representatives] said earlier this month that [the corporation] plans to shut down truck and SUV production at its U.S. plants for three months starting in August, and it will start building the Prius hybrid in the U.S. for the first time in 2010,” AP Business explains.

Two weeks ago, we reported  current drops in auto sales and shared new demands for fuel-efficient vehicles with lightweight metals like aluminum and magnesium. Once this demand is met and more fuel-efficient vehicles are available, it’s possible that sales could pick up for the big automakers. But in the immediate future, it doesn’t seem likely.