Earlier this summer, we reported problems for metals and mining companies when the metals and mining sector was hit with declines of approximately 16 percent. If anything, the sector has seen more problems since that announcement. Although mining companies are throwing billions of dollars at projects this year, they  might have to wait several more years to  reclaim that spend.

In a new article, Patrick Barta notes a problem facing BHP Billiton, a major mining company that had high hopes for Ravensthorpe, their nickel mining project in Australia: “Now, with production under way, the Melbourne, Australia-based mining company says Ravensthorpe isn’t profitable though it will do well eventually. But with nickel prices down 60% from mid-2007 highs and mining costs spiraling higher, some analysts wonder if Ravensthorpe will ever make much money at all.” Keep in mind, however, that BHP recently reported increased annual earnings. In fact, they earned fifteen percent more than last year. Other mining companies haven’t been this lucky as demand for metals softens. For these companies, their turn for the worse mirrors the Ravensthorpe situation more than the BHP boom.

These days, several mines report difficulties with higher costs and troubles with potential outputs and expansions.  Zinc and nickel have been hit the hardest. “OZ Minerals Ltd. of Australia, one of the world’s biggest zinc producers, said major parts of its business sustained a net loss in the first half of the year because of weak zinc prices,” Barta writes. Zinc has fallen to approximately $1,800 per metric ton, a 60 percent decline from highs in 2006. Other zinc projects from Perilya Ltd., Xstrata and Teck Cominco Ltd. have similar concerns to tackle, and some companies might choose to curb zinc and nickel projects in the future. In addition to proposed project problems, falling commodity prices and rising investment costs mean that some mining stocks are about to throw in the shovel — or dig their own mass  grave. 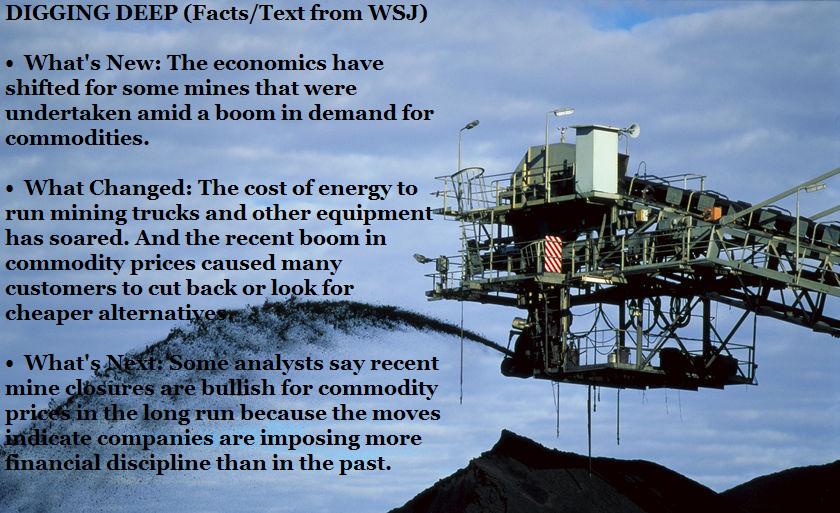