Home | Humor | What Walks Down Stairs, Alone or in Pairs And Makes a Slinkity Sound?

What Walks Down Stairs, Alone or in Pairs And Makes a Slinkity Sound?

Editor’s Note: We needed to sandwich our “heavier” stories with something a little fun…. 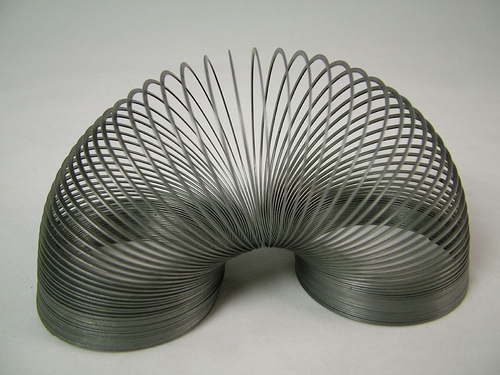 Philadelphia is not only the birthplace of the Amercian Revolution but also of another revolution, an innovation in the toy industry. In 1943, U.S. Naval engineer Richard James was working on a set of tension springs that could be used to support sensitive instruments on ships and stabilize them especially in turbulent waters. One of the springs was accidentally knocked off and Richard observed that it “stepped” into a series of arcs, flipping end over end and eventually still standing upright. Richard told his wife Betty who gave the toy, with a “spring” in its step, the name of Slinky, a Swedish word meaning stealthy, sleek and sinuous. The Slinky ® debuted at Gimbel’s Department Store in Philadelphia in 1945. For the next 38 years, Betty led the company until selling it when she reached 80. She was inducted into the Toy Industry Hall of Fame in 2001. Betty passed away in November.