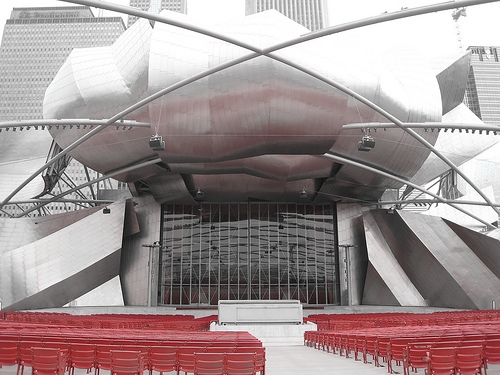 From the stainless steel contortions of Frank Gehry’s Pritzker Music Pavilion (above) in Chicago’s Millennium Park to the stainless steel and zinc exterior of Randall Stout’s modern extension of the Hunter Museum of American Art in Tennessee, among other examples, A. Zahner Company is behind mutable metals that identify mutable architecture. Founded in 1897 and based in Kansas City, the architectural metals fabricator’s mission is To advance the boundaries of metal in architecture and art. The company’s built projects reads like a repertoire showcasing the metaphysical bond between architects and metals, as reported in Metropolis magazine, Long known for its close association with Frank Gehry’s metallic meanderings, the company has consulted and produced skins, structures, and systems for an impressive list of architects, including ARO, Antoine Predock, Morphosis, Steven Holl, Zaha Hadid, Rem Koolhaas, Tadao Ando, and Michael Graves. In the age of folded, textured, and curvaceous buildings, Zahner has become a clinic for twisting and treating metal.

Metal is the DNA of A. Zahner Company. President and CEO Bill Zahnergreat-grandson of the company’s founder, Andrew Zahnerlives in a house of copper. He has also written two substantial books: Architectural Metals, a 450-page educational textbook on the forms and behaviors of metallic building materials, and its 350-page sequel, Architectural Metal Surfaces, which has at its start a metals-laced line from the Book of Malachi: He will sit as a refiner and purifier of silver.