Most of the precious metals appear fairly straightforward (the picture doesn’t look too pretty for 2009) with one exception, gold. Now from a jewelry perspective, I’d always short gold (I personally am not a fan) but alas, that’s not the purpose of this analysis. Many of the major investment banks and research houses are bullish on gold, mostly due to gold serving as the safe haven asset in times of trouble. Banks like Citi predicted back in early December that gold would shoot to $2000/oz though we believe that prediction may be more based on Citi’s own precarious situation. Many are already saying that this recession is the worst since the end of WWII, and deeper than the recession of 1981-1982. But let’s take a look at a few of the key factors that impact gold prices.

For us at MetalMiner, we believe the factors influencing gold include the following: global interest rates, the value of the dollar, inflationary/deflationary cycles, industrial and jewelry demand and ETF investment. In support of gold prices, we have massive monetary stimulus and a lack of confidence in most global currencies. This is the safe haven argument. And in general, gold prices go up when interest rates go down and inflation increases. ETF’s also serve to boost gold prices. Prior to 2005, the dollar and gold traded in lockstep. But since 2005, gold has spiked even when the dollar has declined. So what is our call? We believe demand for jewelry will remain depressed as will industrial demand. Short term, deflation will be a bigger concern than inflation. However, inflation could become a big issue as soon as the economy picks up (perhaps in late 2009/2010). Global interest rates will continue to drop or be pushed lower to stimulate various economies. The dollar will likely remain “relatively” strong over the short term. The research firms believe ETF’s will overcome weak industrial demand pushing up prices. We tend to agree though we’ll temper our estimates with a lower average 2009 price because of deflationary concerns. So if Citi is at $2000, some of the analysts such as Morgan Stanley are at $900, we are slightly less enthusiastic putting our price estimates in the $800-900 range as the yearly average.

For platinum and palladium price predictions, we turn to Johnson Matthey and their 26 year historic chart for both metals: 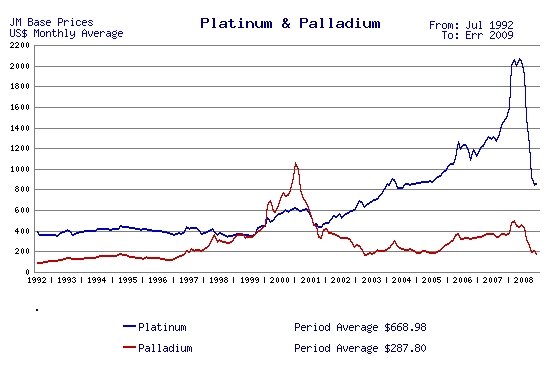 We like to look at these charts because they put pricing in context with the historical average. Clearly the activity of the last two years coincided with the overall metals market boom. Platinum in particular, challenged by significant supply disruptions during the early part of last year, spiked to $2290/oz in March of last year vs. $953/oz on Tuesday. But this year, the issue is less about supply and more about demand (or lack thereof). Catalytic converters and related automotive applications account for an enormous percentage of total platinum demand. And with auto sales and forecasts as horrific as they look for 2009, it’s hard to see how platinum prices can go up by much. In addition, as we have previously reported, automakers are looking at identifying alternative materials for catalytic converters. And they are nearly in the product launch phase as the first cars with less precious metal content will roll off the line later this year for the 2010 Mazda3. Like gold, we don’t see platinum trading much above current levels, at least throughout 2009. Palladium which trades in a much tighter price band will also remain depressed for 2009, though possibly higher than it’s long term historical average.

The silver price charts will look like something in between gold and platinum. Though the long term chart for silver mirrors that of some of the other precious metals:

silver appears to be moving more in line with metals like copper and platinum as opposed to gold. Though there are more ETF dollars flowing into silver, industrial demand still greatly impacts price. Over the longer term, silver will also face supply constraints similar to platinum. Though silver is trading at $12/oz, we feel silver will average in the $9-11/oz range for most of 2009. After that, it’s anyone’s guess.