The Curious Case of the Curta Mechanical Calculator 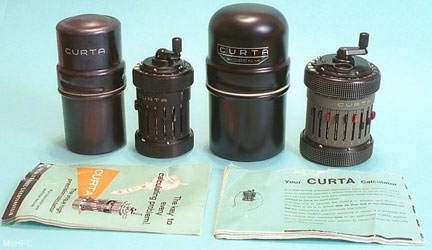 In 1938 before the start of World War II, Curt Herzenstark invented the Curta, a small, hand-cranked mechanical calculator. He perfected the design while in the Buchenwald concentration camp and redrew it from memory when the camp was liberated in 1945. Its compact handheld design and operating handle inspired its affectionate names, including pepper grinder, peppermill, and the math grenade. The Curta can perform addition, subtraction, multiplication, and division, including algorithms for cubes and square roots. All these basic and advanced functions were operatedwithout electricityusing multiple sliders and a series of crank operations. Curta’s manual maneuvering is said to have produced a whizzing or purring sound.

Herzenstark got the idea for his four-function pocket calculator from remarks made by customers during his sales travels. His amazing invention was first produced in 1947 and was used through 1970 when the last one was made, when the world transitioned to electronic calculators. Though not pervasive during its heyday, the Curta endures as a beautiful synthesis of engineering and industrial design, matched by its story of origin.

For biographical information about Curt Herzstark and the Curta, read the translated article by Andries de Man. View other images, inside and out in all its wonderful intricacy, of the original models of the Curta at Dark Roasted Blend, a site of all kinds of weird and wonderful things.

PREVIOUS POST:
Iron Ore to Save us from Global Warming?
NEXT POST:
Aluminum Premiums Coming Down Thanks Airbus and Boeing