Home | Non-ferrous Metals | A Technical Perspective: Aluminum Near a Bottom?

A Technical Perspective: Aluminum Near a Bottom?

We’d like to introduce Lloyd Philip, a quantitative analyst at Cameron Capital Management where he focuses on short term price anomalies in the cash markets. Prior to joining Cameron Capital, he spent the past eight years helping organizations cut indirect purchasing costs through effective sourcing practices and procurement technologies.
The aluminum index ($DJUSAL) has been in a horrendous downtrend since May 12, 2008. While this is a blessing for buyers, I’m sure that most buyers have been hesitant to stock up on aluminum unless they have guaranteed orders on hand. Then again is anything guaranteed in this environment? And what happens if aluminum bottoms and jumps 30 percent before the economy bottoms? You may regret not being prepared to take advantage of the low prices.

Let’s take a look at the historical charts to see if we can find some clues as to what things may happen in the future based on historical price action. The chart below is of the $DJUSAL. This is a 10 year chart of the Dow Jones US Aluminum Index.

As you can see the index bottomed out in late 2002 (blue arrow 1). During this process, the volume going into the sell off was rising (red arrow 5) while prices were falling. This meant that the traders were dumping their open positions without discrimination. Once the $DJUSAL sold off and hit a temporary bottom, prices bounced back nicely as the MACD (Moving Average Convergence Divergence indicator) crossed over (the blue line moving above the red line ¦above blue arrow 3). A crossover similar to this, shows us that the short term price momentum is greater than the mid term price momentum. Well this crossover in itself is not good enough for us to establish a position in the commodity.

Now as you will notice that the blue arrow number 2 in early 2003 represents a test of the 2002 price lows. Prices fell back down to the lows established in late 2002. However, you will notice that the MACD indicator did not come anywhere near the lows that were established in 2002 (blue arrow 4). In addition to all that, the volume in this second sell off was not as fierce as it was near the bottom of 2002 (red arrow 6). In pure trading terms, this means that there were less motivated or fearful sellers left in 2003. If you were watching CNBC they would tell you that there were fewer sellers than buyers. They think we are stupid and that we don’t know that there is a buyer for every seller in the markets, or the transaction never occurs. I wish I could use the VIX to show you what I mean, however, the VIX represents the fear in the S&P 500 and not in commodities. This second sell off flushed the remaining speculators and weak hands/dumb money, leaving a long lasting bottom in aluminum.

Fast forward to 2009 and we have a steeper sell off now. I wish I could represent this in historical terms, but 10 years of data hardly represents history. However, having said that, we have something similar playing out. The blue arrow number 7 is right near the lows for the year. I purposely placed it there instead of near the absolute bottom because that’s where the MACD hits bottom. However, it would be foolish of us to place our bets here since we haven’t seen any visual evidence of a bottom. The MACD could cross under again, volume on this sell off can pick up and most importantly, we don’t have a retest of the bottom like we did in 2002. So we have to be patient as it will be several months before we can come anywhere close to having a confirmed bottom.

First we will need to see a meaningful bounce of approximately 20%, then another drop to lows, however, volume will have to drop during the retest and the MACD should display a higher reading (this is ideal but not a must). By the way, you can use quite a few other indicators in place of the MACD. 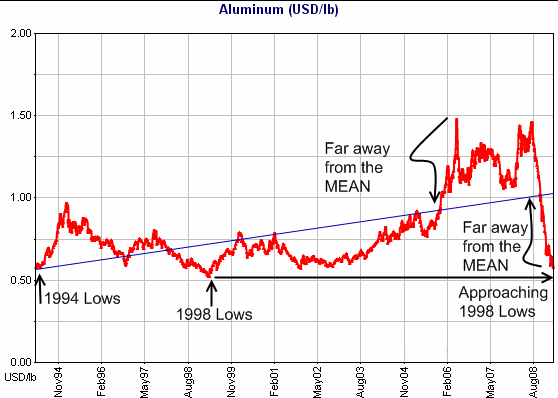 The above chart is a pure price chart going back about 15 years. Based on this chart, it looks like we may see the lows of 1998 before aluminum bottoms. There will also most likely be an undercut of the 1998 lows (slight drop below) before we see the bottom. 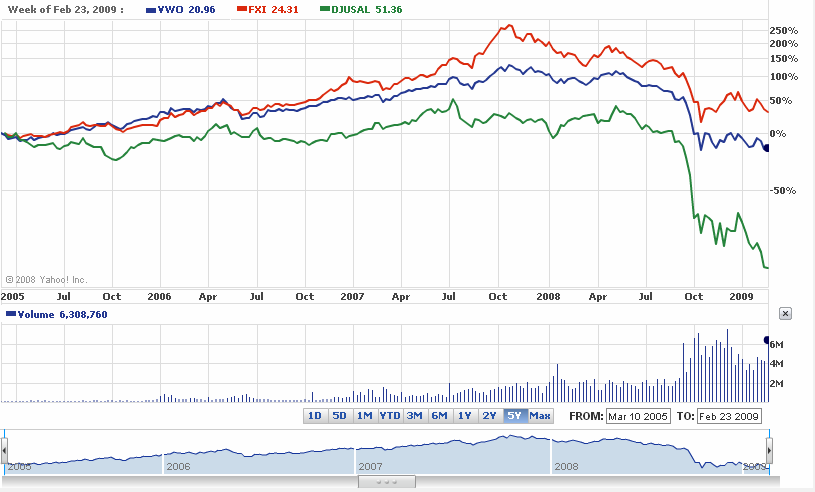 Finally, the chart above was something I came across by accident. The $DJUSAL, the Vanguard Emerging Markets Index (VWO) and the the ishares China ETF (FXI) all seem to be strongly correlated (maybe just coincidence). The only difference is that the aluminum seems to be underperforming the emerging markets but still tracking it fairly closely. So if this coupling effect continues a bit longer, will we be able to see the bottom in aluminum when China or the other emerging markets bottom? In addition to all of that, could we hedge the aluminum by buying options on the FXI? Ok, let’s not get crazy here.

While it’s hard to call a bottom, I think we might be nearing a bottom if things play out similar to 2002. That might be a tall task considering what’s going on in the economy. Who knows AIG, Citi and BofA may come back in 3 months and ask for more money. Funny how much of a big stink they make about GM but dole out freshly printed greenbacks to all the others. Just a wee bit of hypocrisy. Tiny.

Disclaimer: This post does not represent supply and demand imbalances, production cuts, or any other fundamental or governmental factors related to aluminum. It is merely a technical perspective of the trading markets.