Tinplate Prices Going Up While Steel Coil Comes Down

What is good news for workers at Corus’ Trostre Tinplate mill in South Wales graphically underlines the current state of the North American and European tinplate markets. Corus has announced plans to cut 2,500 workers or just over 10% of it’s workforce in the UK. Meanwhile, Corus Packaging Plus, the group’s packaging division, had announced plans in 2008 to cut European Tinplate production from 1.5 million tons to 1.2 million tons by closing its small mill at Bergen in Norway and cutting capacity at Trostre in South Wales, UK. But this year, Corus has rescinded that decision in the face of strong demand for tinplate, thought to be pretty much recession proof. In addition, profits have greatly improved despite the fact that the underlying steel price has collapsed.

This last point underscores the blessing and curse of the annual contract model used by makers of tin cans. In 2008, the composite North American steel price for hot-rolled coils (the type used for tinplate) traced a bell-curve, rising from $734 per ton in January to $1,223 in July and falling back to $771 in December reported Business Week. Meanwhile, buyers, who typically have contracted prices a year in advance, paid a constant price for tinplate. This year, steel producers such as Arcelor Mittal started the 2009 negotiations last September pushing up the price of tinplate to consumers by 40-50% for 2009 reflecting last year’s highs. With tinplate production concentrated in the hands of relatively few producers like Arcelor, US Steel and Russia’s Severstal the mills have the advantage of tight supply side discipline to control the prices. Even major tin can makers such as Crown Holdings, Ball, and Silgan Holdings, the three largest players in the US tinplate market have relatively little room for maneuver. Steel suppliers largely honored their 2008 contracts as underlying steel prices rose and then fell. Substitution by aluminum and a gradual move to reducing the water content of food products to shrink the can size are often the response to higher can prices but alternatives for can makers are limited. Consumers will not notice much difference – cans represent between 20% and 40% of the final product cost with the higher side represented by thick paint cans. It is estimated that a food can costs about 8 ¢, which translates to a 1 ¢ or 2 ¢ price increase on the shelves.

In contrast, the Asian market for tinplate follows the underlying steel prices on a month by month basis. Baosteel, China’s largest tinplate producer, has been dropping tinplate prices since a peak in October while Chinese-Korean and Chinese-Japanese producers have been forced to follow in their wake. Chinese tinplate production grew by 600,000 tons in 2008 as two new tinning lines came on stream at Baosteel and one new one at Zhongyue POSCO. As a result, domestic Chinese supply-demand pressures will ease this year even as demand continues to grow from a current level of about 2,3 m metric tons. In the wider SE Asian market though Japanese tinplate manufacturers are trying not to reduce prices any further for the second quarter and are even talking of price increases. With the Chinese mills willing to export and new tinning lines due to come on stream in Thailand later in the year, it is doubtful how successful their approach will be. Buyers generally have been reluctant to book forward as they have seen the steel makers’ costs dropping. Forward sales are therefore below levels last year and negotiations are proving difficult.

It raises the question to what extent could US can makers mitigate their overall cost increases by blending an increased percentage of imports with their domestic purchases? Europe has been a consistent supplier, with metal mostly coming from Thyssen’s Rasselstein, numbers two and three Arcelor Mittal and Corus, have not been as active. But far larger volumes are coming in from Canada, Mexico, China and Japan as this graph shows. 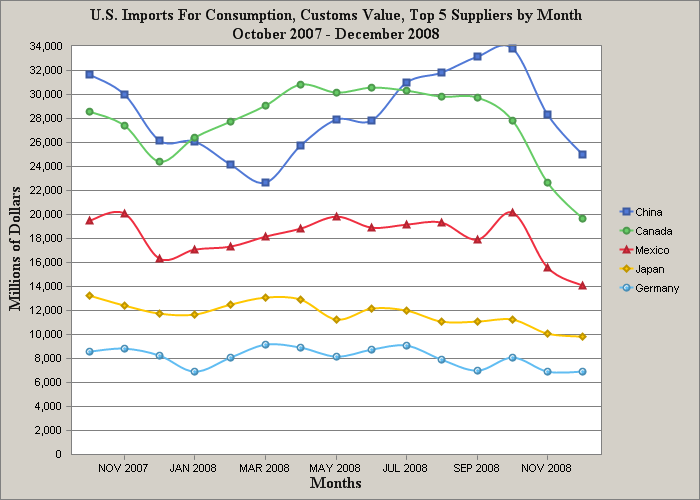 US mills have largely concluded their 2009 sales now so to what extent can makers can impact their cost base is likely to be limited but, exchange rates permitting, expect imports to be an increasing trend after a year in which consumers will be paying inflated prices to domestic mills.

PREVIOUS POST:
Houston: We Don't Have a Problem??
NEXT POST:
Innovation Alive and Well in the Automotive Industry