We’d like to welcome back Lloyd Philip, a quantitative analyst at Cameron Capital Management where he focuses on short term price anomalies in the cash markets. Prior to joining Cameron Capital, he spent the past eight years helping organizations cut indirect purchasing costs through effective sourcing practices and procurement technologies.

With a bevy of negative data and emotions surrounding us, I am thinking of turning bullish on America.   In order to do so, I need to be bullish about GM and Ford. Lately there hasn’t been a lot of good news coming out of the auto sector. As I watch CNBC I hear everything from: let them go bankrupt, let China buy them out, don’t give them any more money and eye rolls. Having said all that, I think we are closer to the bottom than what all the talking heads spew out.

It’s usually the darkest before dawn. 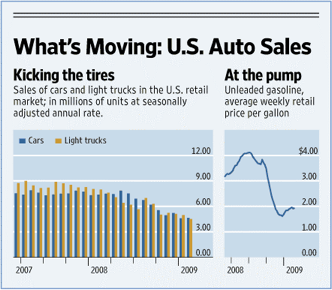 Current sales are down right ugly with numbers reaching 1981 lows. However, since the early 80s, there have been 25% more licensees that have hit the roads. It is estimated that the seasonally adjusted annualized rate of sales will be around 9.1 million cars and light trucks. Current sales estimates are down 41% from the peak of 15.4 million units in 2007.

To comply with existing or future bailout terms, the domestic auto companies have to cut overhead and production costs. Having negotiated with the UAW reduced head count, the only other place left to cut is the output.

GM plans to cut capacity by 34% and Ford by 38%. Toyota and Honda plan to tap the Japanese government for loans and they too are planning on additional cuts. With these massive cuts, we are on pace to produce about 4.5 million cars for the US markets. There’s a disconnect here. Unless these are OPEC style cuts, the auto makers are creating a supply and demand imbalance. While there is inventory of already produced cars out there, it will not make up for the 4.5 million short fall between project sales and projected auto output.

Not your daddy’s antique 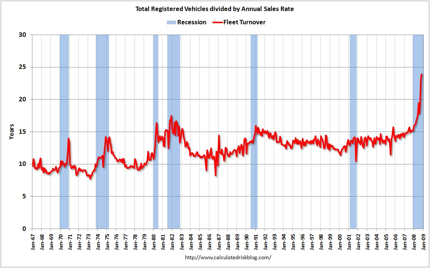 Calculated Risk charted the life span ratio of existing vehicles. The current ratios are at around 24 years. Wouldn’t we love to see our high maintenance significant other driving our 24-year-old car? During the Ã‹Å“80s this ratio peaked out at around 17 years. With the current scrap rates of 11 to 13 million cars per year, it is fairly easy to see how we are going to having a lot fewer cars on the road if the current sales rate continues.

Now keep in mind, I don’t expect a rapid rise in sales as long as the existing credit market spreads are wide, consumer debts remain at unsustainable debt levels, housing keeps declining and lending standards remain extremely high.   However, if these production cuts hold and demand comes back in line with historical sales, I expect the auto industry to

And if that isn’t a cloud with a silver lining, I don’t know what is.