Home | Non-ferrous Metals | Nickel finally Finds it's Floor, Where to Next?

Nickel finally Finds it's Floor, Where to Next?

Nickel has quietly been consolidating a bottom to its price trough these last few months. Following a calamitous fall from $8.80/lb at the start of September to nearly $4/lb in late October 2008, the metal bottomed out at an average around $4.50/lb since. Bouncing around on good news and bad, dollar fluctuations and financial scares either side of this number it has been particularly stable this last month as the graph from the LME below shows: 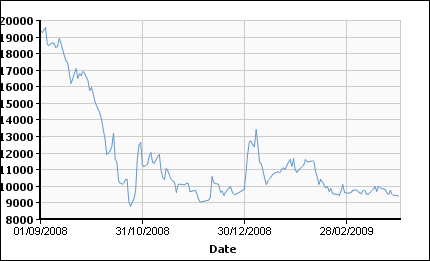 Yet at the same time, LME stock levels (the most visible but far from the only one) have continued to rise from 78k tons in January to nearly 107k tons now. Not a huge rise you may say when looking at many other metals but significant in that it has failed to depress the price. Moreover, stainless production and prices have continued to contract in the face of weak demand ” stainless steel and alloys account for 87% of nickel demand according to some sources.

So why the new found resilience in the nickel price? Production has been closed in the face of falling demand although many feel the cutbacks have not gone far or fast enough. Demand reduction has been as a result of both the current contraction in manufacturing, particularly among autos, white goods and capital projects, but it has also been exacerbated by demand destruction as a result of nickel grades of stainless being substituted by low or zero nickel alloys. This has been going on for 1-2 years and as new alloys are designed in, long term demand destruction for nickel becomes inevitable.

Deutsche Bank is suggesting stainless demand will continue to grow by 7.2% per annum led by China with a 20% growth into 2010. But the same report is suggesting growth in North America and Europe will be 2.8 to 4.0% which we cannot see this year so we take that global projection with caution. Even CRU appears to support their projections, but just because demand was relentlessly increasing from 2000 to 2007 doesn’t mean it will continue to increase this year and next. Boosters point to demand among aerospace, petrochemical and nuclear; but again we cannot see strong demand from these sectors before 2011 at the earliest. However the wider market does appear to feel that supply and demand is coming closer into balance in spite of the gradually rising inventory levels. If they are correct (and they only have to believe they are correct for investors to influence the price) then we could see nickel prices firming later in the year or early next year. We cannot see a supply side crisis that would justify a dramatic price rise but for consumers able to predict forward demand the second quarter may not be a bad time to be covering a percentage of forward requirements for 2009/10.