Anyone looking at the Chinese import figures and LME price for nickel may be forgiven for thinking the stainless market has picked up with a vengeance. The LME price has fluctuated wildly since October 2008 from $9000/metric ton to $13,000/metric ton as the following graph from the LME illustrates: 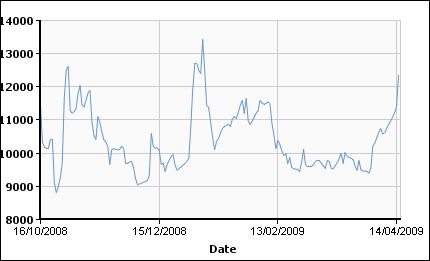 However MetalMiner’s own historic pricing reports show the domestic market nickel price in China has been  fairly steady over the same time frame as the upper bar illustrates. We come onto April in a moment. 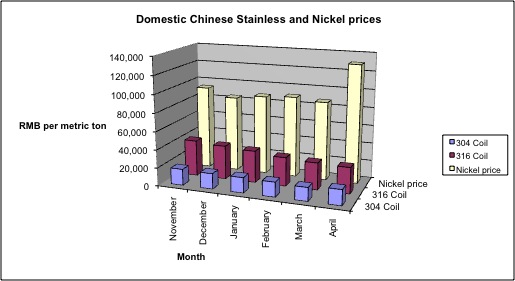 The largest consumer of nickel is the stainless steel industry taking some 65% of the approximate 1.5 million tons of global nickel production so, as we have reported before, as stainless production has declined globally so has demand for nickel. But while nickel prices in China have dropped only 6-7% since November, the 316 stainless price has dropped nearly 30% suggesting demand from other applications is holding up relatively better than nickel grade stainless demand.

The last peak on the graph supports the dramatic rise in nickel imports seen recently in China as investors scramble to buy up stocks at what are increasingly being viewed, at least domestically as cheap prices, has pushed up prices. China’s imports of refined nickel and nickel alloy already surged 66 percent on the month to 12,690 tons in February. Data for March is expected to be released next week according to Reuters, but the MetalMiner price spike illustrated above suggests if anything, imports will be even higher. So far, the State Reserves Bureau has not been buying nickel nor have end-users in any significant quantities. The demand has been driven by traders speculating that demand will rise later this year. If the SRB does decide to add nickel to its stockpile, expect the price to move up further. SRB purchases notwithstanding we see this as a relatively short term position taking activity and cannot see the justification for prices to move any further. Stainless demand remains weak and although China is maintaining an enviable 5.8% growth in the first quarter according to Goldman Sachs that is a far cry from the double digit rises seen in recent years. It’s not enough to sop up the over capacity in the industry anytime soon.

PREVIOUS POST:
Is China Using its US Dollar Reserves to Stockpile Metals?
NEXT POST:
We Take Issue with Aluminum Market Hype