True to form the protagonists in the annual iron ore negotiations game are playing the media for their own ends. In separate Reuters reports, China has been building the argument for lower prices. China’s no.2 steel producer, Anshan Steel came out on Thursday saying the negotiations are gridlocked as neither side could agree on the level of reduction from last year. Talk is of a 40-50% reduction but with spot prices way below contract prices the mills are holding out for prices closer to spot. Meanwhile the official press is saying that due to continually falling prices nearly half the Chinese steel industry is in the red and they are looking to the big three of Vale, BHP and Rio to help them through these difficult times. The MetalMiner IndX(SM) supports the statement that prices have been sliding steadily this quarter as the following graph shows. 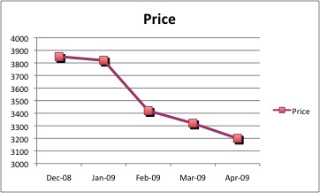 As if to support the apparent oversupply of finished products and a weak market, iron ore stocks at Chinese ports have risen this quarter on the back of record imports up 46% on a year earlier but without consumption materializing as expected.

Meanwhile the miners are keeping their heads down. BHP’s recently released third quarter production report buried details of spot vs contract sales deep within the details. Lower priced spot sales made up 28% of production from the company’s WA Mount Newman mine, nearly triple the 10% or so of sales that usually go into the spot market. The firm, and there is no reason to suppose Rio and Vale fared any better, were forced into spot sales to prevent a build up of stocks as sales volumes dropped.

Once the dust settles on the negotiations, these annual contracts may become a thing of the past if the over the counter iron ore contracts to be launched this month in Singapore gain widespread acceptance. A move to a hedgeable and more fluid pricing environment would allow consumers to cover a portion of their purchases forward and decide for themselves how much risk they wanted to take in relying on the spot market depending on their own business demands and appetite for risk.

PREVIOUS POST:
Shipping Costs to Remain Low for Next Few Years
NEXT POST:
Weighing the Merits of Steel Anti-Dumping Cases