We have recently written about weighing the merits of anti dumping cases and received some comments from readers regarding the treatment of steel mills by their multi-national owners north and south of the US-Canadian border which we felt deserved further review.

No one doubts the need for producers to respond to the changes in the market place in which they operate. However there is widespread suspicion that the concentration of steel production in the hands of comparatively few major players during this decade has been with the express intention of manipulating supply and demand through good times and bad to maximize the owners returns. Just 12 short months ago, mills were eagerly exporting product overseas while putting their domestic clients on allocation and raising prices on a monthly basis. Then, as the market crashed in the fall of 2008, mills rapidly moved to idle capacity in an effort to bring supply into some semblance of balance to demand. A process that is ongoing with capacity utilization in the industry between 40 and 55% depending on whose stats you look at. In accommodating that range of course some plants have been closed completely while others have to run close to capacity. You can’t for example, run a blast furnace at half speed – its all or nothing. So is there a pattern as some suggest as to which mills are still operating and which have been first to close?

Rolf Gerstenberger, president of the Canadian United Steelworkers Local 1005, accuses US Steel owners of the former Stelco steel works at Hamilton Steel and Lake Erie Works in Nanticoke of unfairly closing Canadian operations and moving work to three US operations at Gary, IN. Pittsburgh, PA and Fairfield, AL. Arcelor Mittal have closed their Canadian Contrecoeur location with the loss of hundreds of jobs yet kept US operations going. Evraz Steel’s Regina works has been temporarily closed only to be followed by a maintenance close-down this month with doubt if it will reopen in June.

In the time available to put this together it was not possible to establish the numbers working in the steel industry north and south of the border or more importantly  get a firm handle on the lay-offs relative to the total number employed but some points did become clear. A rough estimate suggests somewhere between 3500 and 4000 Canadian workers may have been put on furlough since the fall. As this chart shows, production has collapsed in both markets to a similar extent, in fact from July to Dec production fell 51.25% in Canada and 54% in the USA. 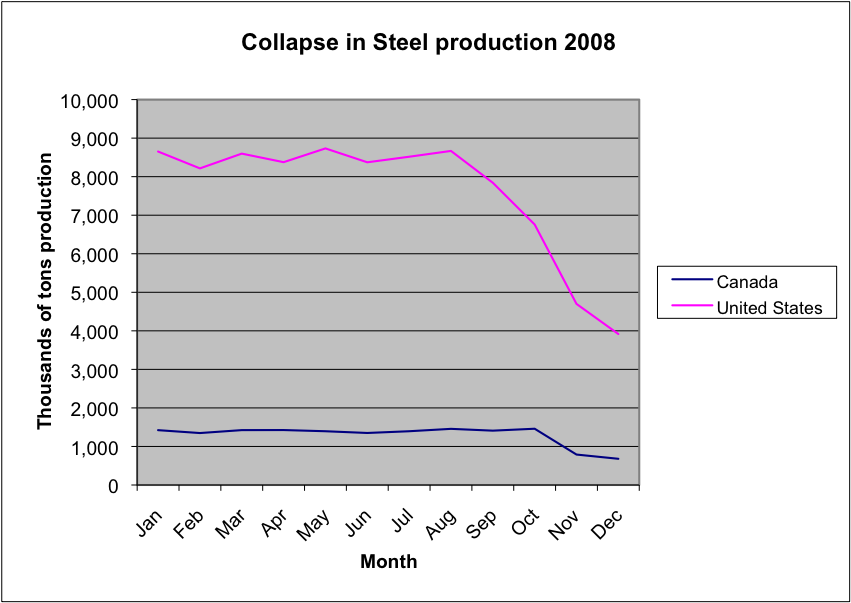 Faced with such drastic drops in demand, the manufacturer’s official position has been to concentrate production at the most efficient operations but how that is applied is open to question. Quoted in Yahoo Finance steel industry expert Peter Warrian said US Steel’s Canadian Lake Erie plant is the company’s most modern and productive, and is generally accepted as one of the most efficient plants in North America, yet production has been idled in preference to plants in the south.

Looking at the total reduction in production north and south it would appear producers have been even handed and certainly there is no suggestion that furlough agreements and so on have not been honored. Workers, politicians and the communities they serve are hoping the downturn is a temporary one. Judging by the actions of the producers though, putting plants into long term  care  and maintenance,  it looks like it will be anything but.

We would welcome comments from readers.