A recent article in the Financial Times discusses how GE is investing $100m in a new battery production facility near it’s research labs at Niskayuna, New York. The article makes much of the fact the facility will employ 350 people, be operational by mid 2011 and though it has already benefited from $15m of state aid, GE is hopeful it will also qualify for federal stimulus money to help pay for construction costs. What the article only mentions in passing is the Sodium-Sulfur battery technology GE is looking to develop.

NAS (from Na – Sodium and S ” Sulfur) battery technology is best suited to large scale non mobile applications such as energy grid storage especially in evening out the power flow from renewable energy sources like wind power generators. The battery type has a high energy efficiency of charge to discharge in the region of 90% and a long cycle life. The materials needed to construct it are plentiful and of relatively low cost. The only draw back is the operating temperature of the cells is 300-350 decrees C (570-660 degrees F) and the sulfides produced can be highly corrosive ” clearly this kind of battery isn’t suited to laptops. Indeed so corrosive is the sodium and sulfur core it has to be encased in chromium and molybdenum and to minimize heat loss, the cells are arranged in blocks the size of a double decker bus for better heat conservation and then encased in a vacuum insulated box. Size for power storage though is still in NAS favor according to USA Today, the battery takes up a fifth of the space of a comparable Lead Acid battery facility and lasts three times longer. The heat generated from the charge/discharge means the operating temperature is self sustaining.

AEP, American Electric Power has been using 1.2Mw NAS battery in Charleston W.Va for the past year and has found the trial so successful it is planning to install one twice the size later this year. The relatively high cost of the plants at the moment are largely a function of the low production runs. GE’s mass production entry into the market should bring installed capacity prices way down and in the process buy valuable years before grids have to be upgraded or new thermal power station capacity installed to meet peak demands. 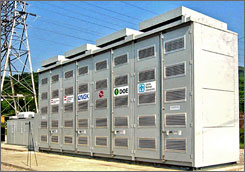 With the growth of renewables, which by their nature tend to be intermittent in power delivery, the need for energy storage will grow in tandem. Jeff Immelt, GE CEO predicts this will be a $1bn business within a decade and sees applications for the technology in mining, telecommunications and even for a new range of hybrid locomotives to be brought out by GE next year.