Yesterday we discussed some of the arguments behind these anti-dumping cases. Today we look at a few more. The first post appears here.

Some argue that the Chinese steel industry is based on paying wages insufficient to sustain life.

Compared to wages in the US, wages in China remain lower, but so does the cost of living. Wages remain lower in India too, and Brazil, and Eastern Europe and just about everywhere outside of the US, Japan and Western Europe. Will we not allow imports from any country with workers salaries below the US’? That is, to ignore the relative cost of living around the world.

US producers will point to how much more productive US mills are, compared on a tons-of-steel-produced-per-man basis. But when wage costs are low, companies invest in less automation, so productivity measured in terms of steel-produced-per-man also inevitably compares lower. But lower productivity measured in this way does not mean steel is being produced below cost, it just means the production costs are distributed differently. The cost of living is extremely low in China. A worker’s salary of $500/month may not sound like much in the US, but it goes a long way in rural China.

Some claim that China’s export tax rebate scheme subsidizes export. But does it? The US does not operate a VAT system, but in countries where it is operated such as the European Union, companies can reclaim the entire VAT that would normally apply to the sales price on goods exported.   In the EU, businesses essentially are VAT neutral. Only the final client (usually the man in the street) pays un-reclaimable VAT. But for exports, companies are not expected to charge VAT, yet they can reclaim the entire VAT they paid on raw materials, energy, etc. So when Chinese producers are able to reclaim 10 percent of the 17 percent VAT they have paid on materials, they still have to swallow 7 percent of the VAT, actually putting them at a disadvantage to producers in other countries where VAT is collected.

A broad definition of unfair trade practice includes an assessment of the price at which a producer sells in the home market compared to the price they sell in the export market. If sales in the export market are lower than the home market, they are said to be dumping steel. The suggestion is that they are subsidizing exports with high priced domestic sales. In the case of steel, the definition is narrower and the government is looking for material injury to domestic US producers, so we will not try to make a judgment on that. The facts can be interpreted and presented in any one of many ways. The fact that US steel companies earned record profits year over year from the middle of this decade onwards suggests they were not materially harmed. But they would no doubt claim otherwise. Clearly, at present no one is making money from steel production, but that is not China’s fault. As the following graph shows, imports from China have actually dropped over the last two years and the shortfall came from Canada. We would count any NAFTA source as home production. 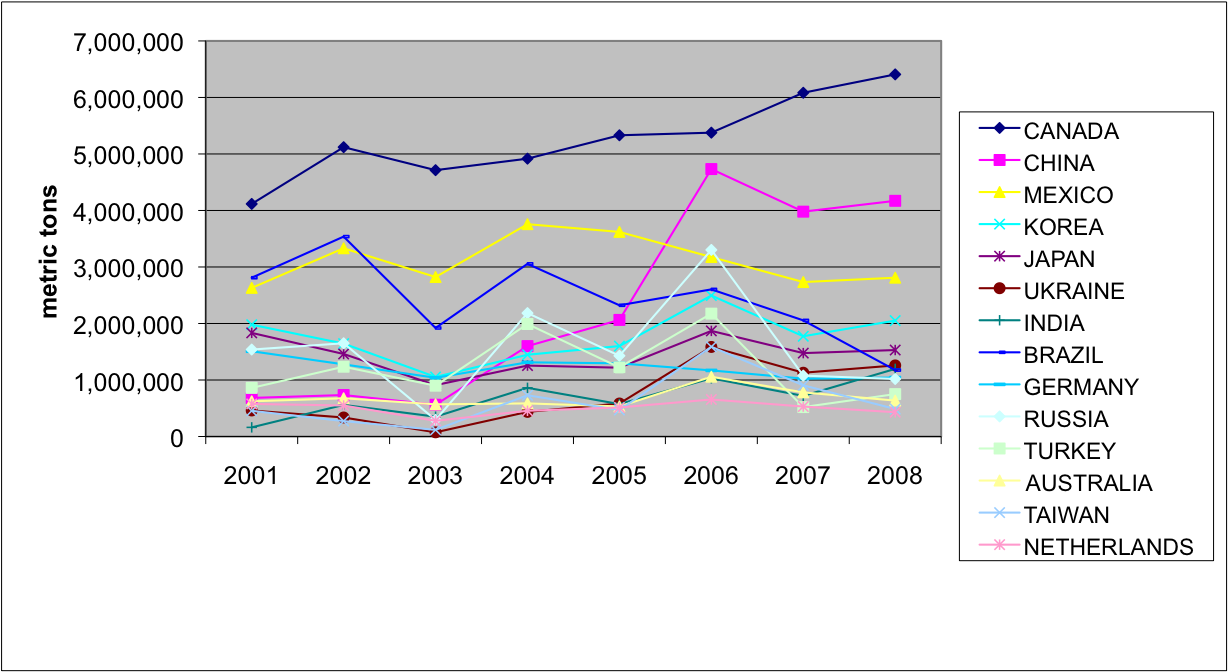 Imports in metric tons have varied by country, but when consolidated into a global view, imports have remained reasonably steady, rising to a peak in 2006 and falling since. The table below shows the actual volume of imports since 2004.

Data taken from US Department of Commerce Census

Does China sell steel unfairly into the US market, thereby materially damaging US producers? Should countervailing duties be applied to keep Chinese steel out or at least force up the price domestic consumers have to pay for it? With the clear exception of currency, you may feel much of the data is debatable. The industry would argue otherwise, but that’s their right.

Our concern remains — higher steel prices for consumers will hurt everyone and reduce America’s ability to compete abroad. However, if the issue of currency manipulation can be resolved between China and the rest of the world, then there should be no need for countervailing duties. Chinese prices will have to increase if Chinese producers are not to face bankruptcy. If prices remain competitive in the US in spite of a firming currency, then the US producers have ample grounds for going to the WTO. And under those circumstances, we would support them strongly. The price pressure brought about by a firmer Renminbi exchange rate would itself bring about consolidation among Chinese producers and trim back excess capacity to only the more economically efficient plants. Perhaps we can all at least agree that would be a desirable state of affairs.