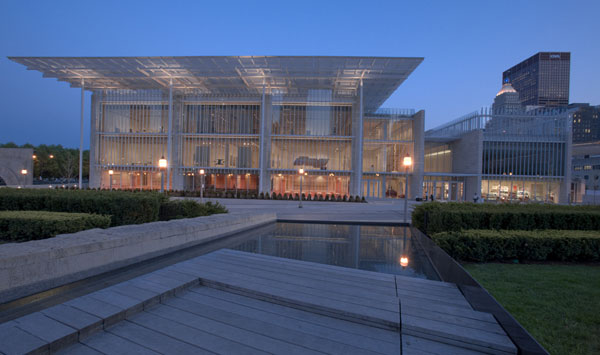 View of the Modern Wing at the Art Institute of Chicago taken from Millennium Park, facing south. Photograph and caption by Michelle Litvin

The Modern Wing of the Art Institute of Chicago made its public debut on May 23, 2009. It is the largest expansion in the museum’s history. The museum is home to a diverse collection: twentieth- and twenty-first century art and design (specifically modern European painting and sculpture, plus contemporary art), along with film, video, and new media. Special exhibition and gallery space is also devoted to works within the Department of Architecture and Design and the Department of Photography.

One of the museum’s more prominent features is the aluminum-grid canopy, which hovers over the building’s two pavilions, channeling northern light into the third floor galleries while deflecting harsher southern rays. From Piano’s statement:

Flying above the art pavilion will be a shelter that filters the sun to create the natural shaded light conditions ideal for the enjoyment of art. This shelter is a kind of flying carpet made of aluminum leaves that perform the same job as the tree canopies all around in the park. It is a Ã‹Å“soft machine’ that sensitively levitates above the new wing, vibrantly screening the light.

The roof truly earns its dual label of flying carpet and solar machinethe latter being a particularly apt reference that stems from the site’s topography. When the Chicago Tribune’s architecture critic Blair Kamin led a tour of the unfinished space in June 2008, Piano grabbed his legal pad and sketched the museum’s site:

Thin gray pencil lines, running across the page, symbolized the museum’s Ã‹Å“flying carpet’ roof, which runs over the top of the building and consists of curving aluminum blades designed to transform harsh, direct sunlight into soft, diffused light.”

He drew the sun’s path, making a line that arced from east to south to west. He praised the original city planners of Chicago for laying out a street grid aligned on precise east-west, north-south axes. It is far easier, he said, to design a light-filtering building in Chicago than in Manhattan, where the city grid is skewed off the east-west, north-south lines. The gallery windows of his wing face due north, which will do much to eliminate sharp rays of sunlight.

The city’s grid, he has written, is Ã‹Å“perfectly in tune with the cycle of the sun, like a solar machine.’

Piano’s passion for the vital intersection of light and built form, including location, remains persistent. From Nicolai Ouroussof’s review of the completed Modern Wing in The New York Times:

Mr. Piano has been slowly refining his lighting systems since the mid-1980s, when he completed his design for the Menil Collection building in Houston. Over the years these efforts have taken on a quasi-religious aura, with curators and museum directors analyzing the light in his galleries like priests dissecting holy texts.”At the Art Institute Mr. Piano has stripped the system down to its essence. The glass roof of the top-floor galleries is supported on delicate steel trusses. Rows of white blades rest on top of the trusses to filter out strong southern light; thin fabric panels soften the view from below. 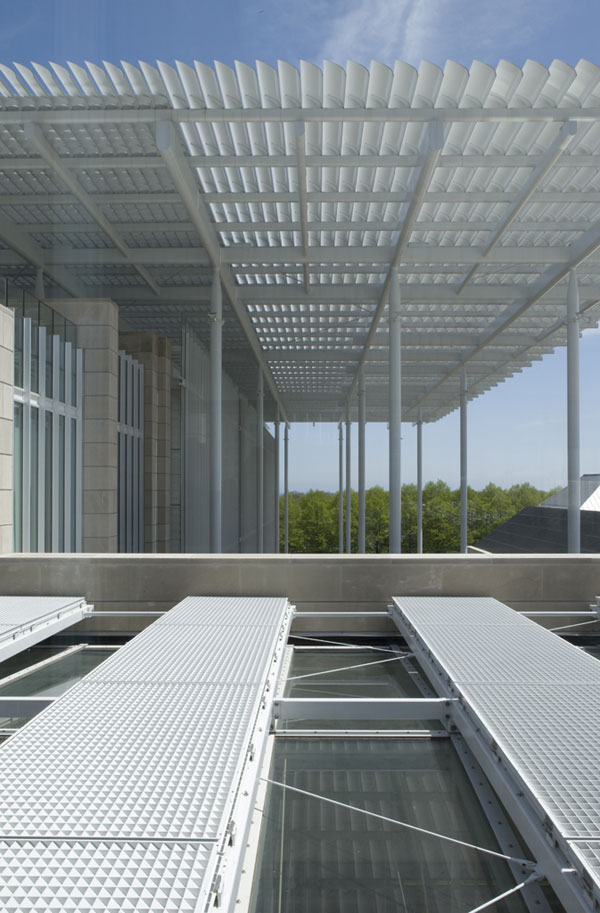 View of the “flying carpet” roof covering the eastern pavilion of the Modern Wing at the Art Institute of Chicago. The photo was taken facing east from Terzo Piano, the restaurant on the third level of the building’s west pavilion. Photograph and caption by Michelle Litvin

Chicago’s Louis Sullivan’s persistent triad of Form follows function runs through these statements. Piano’s flying carpet harnesses the solar machine, directing the migration of natural light and conserving energy. The building aims for a silver rating in the Leadership in Energy and Environmental Design (LEED) evaluation system of the U.S. Green Building Council.Whether the reception of the Modern Wing is viewed as an enlightened design or as exclusively craftsmanship, it is an extension of the forward-looking, steel-framed skyscrapers that put Chicago on the architectural map more than 120 years ago. The raw material of metal plays a role again in the architectural experience, or the emotion of discovery as Piano put it.

See The New York Times’ slide shows one and two of photographs of the Modern Wing by Michelle Litvin.

PREVIOUS POST:
Rio Climbs into Bed with BHP and Shuns Chinalco
NEXT POST:
Greenland: A New Source of Metal Supply?