Zinc prices have recovered significantly since the beginning of this year but then when you look at how far they had fallen some recovery was inevitable. After all, the fall of Q4 2008 was a reaction to global panic not a reflection of a complete cessation of consumer demand. Consumer demand dropped and both the markets and producers could see demand would be down for a period of time but it was intermediates in the supply chain and primary suppliers that saw the greatest, albeit temporary, collapse in demand.

This year demand has slowly improved although end user demand from the galvanized steel and brass alloying markets still has a long way to go to recover to 2007/8 levels. China’s SRB purchases have helped firm sentiment. Maybe they have helped too much creating a false sense of the real demand as we have seen in copper.

As  Reuters has commented without the SRB and Chinese supply chain re-stocking, the market would have been in much greater oversupply, to the tune of 373,000 metric tons. On the back of sustained Chinese buying, zinc prices  rose to nearly $1700/ton in early June but have since fallen back to below $1500/ton as the markets have seen  purchases fall off. The following graph from the LME illustrates how the price has recovered this year only to show recent weakness as China has stopped buying. 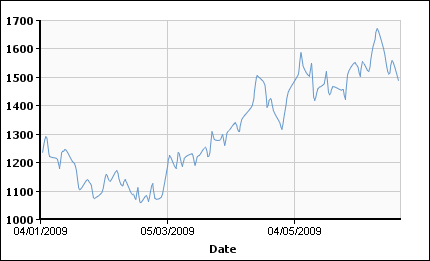 Standard Chartered is quoted as saying they see the price drifting off during the normally quiet summer season to $1414/ton and $1500/ton for 2010. Both prices suggest the recent rises are over done and the supply market is likely to remain in surplus for the foreseeable future. The World Bank seems to be in agreement. In the Guardian newspaper the Bank is reported to have raised its prediction for the global economy to shrink by 2.9% this year from its previous estimate of 1.7% and Standard & Poor’s is downgrading expectations for many mining companies on poor 2009/2010 commodity price prospects.

The zinc market may have further to fall. Like copper, zinc is better supported than aluminum or nickel by the supply fundamentals but the recent weakness in prices is a sign of some reality creeping back into the markets that demand is likely to remain weak well into next year.