Honda Takes to the Air

I have been a fan of Honda ever since more than a decade ago, when I pulled up outside a house to ask directions of a lady cutting her lawn with a petrol mower. When she switched off the machine to answer my question I apologized for causing the effort I knew would come with restarting it (for those of you that remember pull start mowers from the 1990’s). Her reply has stuck with me always oh don’t worry she smiled sweetly it’s a Honda. In the intervening years I have owned Honda cars and mowers myself and never ceased to be amazed by the company’s ability to create low cost, ergonomically pleasing, efficient and most importantly unremittingly reliable machines. So when a colleague drew my attention to Honda’s foray into the world of aviation I was monetarily thrilled with the prospect of a new age in aviation, only to find the new HondaJet is a 5/6 +2 seat business jet or air taxi depending on the configuration.

Like Honda’s other products, Honda Aircraft Company Inc (HACI) appears to have invested a huge amount of time in design. The chief designer and company CEO Michimasa Fujino has broken several preconceptions as this photo of the plane shows. 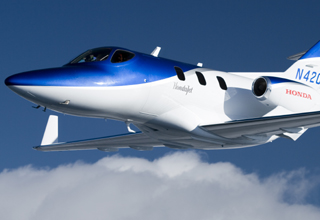 First, unlike nearly all other business jets, the engines are placed not on the rear section of the fuselage but uniquely above the wings, breaking all previous rules which said placing the engines in this position would increase drag and reduce range. Extensive mathematical modeling and testing in Boeing’s wind tunnels proved the concept and allowed the designers to create more internal cabin space for the same external dimensions. The second design change that strikes you is the bulbous nose, slightly reminiscent of a dolphin. While this has the benefit of creating extra cockpit headroom, the primary intention is to improve laminar flow over the fuselage, again improving range by reducing drag. The result is an aircraft with comparable range and carrying capacity to Cessna’s Citation CJ1+ but smaller externally and with a sales price of   $3.6m instead of $4.3m for the Cessna.

The fuselage is of a composite construction and GKN at Tallassee, AL have been awarded the contract to supply the sub assembly while Avcorp will make the wing structural sub assembly at their plant in British Columbia. Final assembly will take place at HACI’s world HQ at Greensboro, NC. Material details are hard to come by but the company says their quest for low drag requires they make the wing exceptionally smooth; the integrally machined upper skin creates a very favorable pressure gradient by avoiding drag inducing rivets. The GE/Honda HF120 engines allow a higher max cruise speed than the Cessna and Fujino says they may even limit the engine because it produces more power than required.

Although the market for business or executive jets is hit harder than almost any other section of the aerospace business, HACI’s launch date for first deliveries of 2011 means they can continue to develop their production capabilities and establish their supply agreements with the benefit of reduced materials costs. Even so the firm has   orders for over 100 aircraft in hand and though some will suffer postponement, the combination of low cost and delightful design are sure to give them an edge against established competitors.