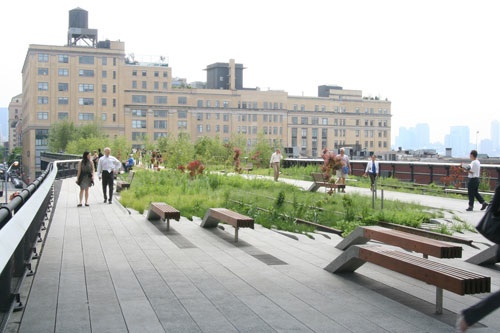 From the start of its construction in April 2006 to its initial debut in June 2009, the High Line Park is a noteworthy demonstration of architectural reusability. The park’s core is the High Line: a 1.5-mile stretch of former elevated freight railroad of the West Side Line, running 30 feet above Manhattan between 10th and 11th Avenues, from 34th Street down to the Meatpacking district’s Gansevoort Street. According to the American Society of Landscape Architects:

Bringing attention to the ability of landscape architects to restore post-industrial environments, create habitat for both people and wildlife, and make urban renewal engaging and attractive, the High Line may prove to be one of the major sustainable design and urban renewal stories of 2009.

Formed in 1999, the community-based group, Friends of the High Line, championed the conversion of the elevated railway into a park. From their timeline of the project:

The railroad structure resumed as an urban renewal actor on March 1, 2004, when the Friends of the High Line released a Request for Qualifications to change the 1.5-mile elevated railroad on Manhattan’s West Side into a public open space. In August 2004, a team led by New York-based landscape firm Field Operations and architects Diller Scofidio + Renfro were selected to design a master plan that would turn the abandoned section of elevated freight track into a public park, two stories above the city. Reported by The New York Times, one visionary detail concerned the railways:

The architects plan to keep the original steel railingsÃ‹Å“designed to keep locomotives from plunging into the street,’ Mr. Scofidio said. To meet the code requirements at crosswalks would require the installation of eight-foot walls that would obstruct east-west views. As a result, the architects are planning to add glass or a fine mesh to the railings and to create a wetlands area at 14th Street that will keep people from the edge. 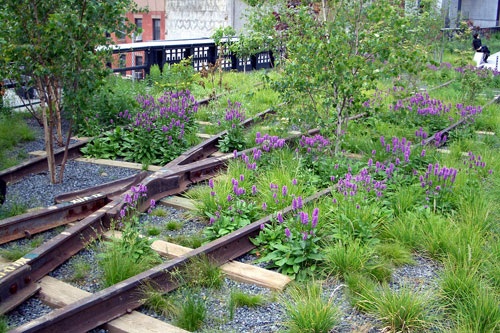 Photograph by John Hill, A Daily Dose of Architecture, at Flickr
From its grim beginnings and disuse in the twentieth century to its current redesign, the High Line’s metal structure underscores the experience of a historical site no longer abandoned. It’s an enduring element of a former life transformed into a place of reinvigorated familiarity.

PREVIOUS POST:
Deutsche Bank Report on the Prospects for Base Metal Markets
NEXT POST:
Euro as Second World Currency but Adoption Could Hurt Eastern Europe