First, we start with this picture, from the National Association of Manufacturer’s blog site www.shopfloor.org: 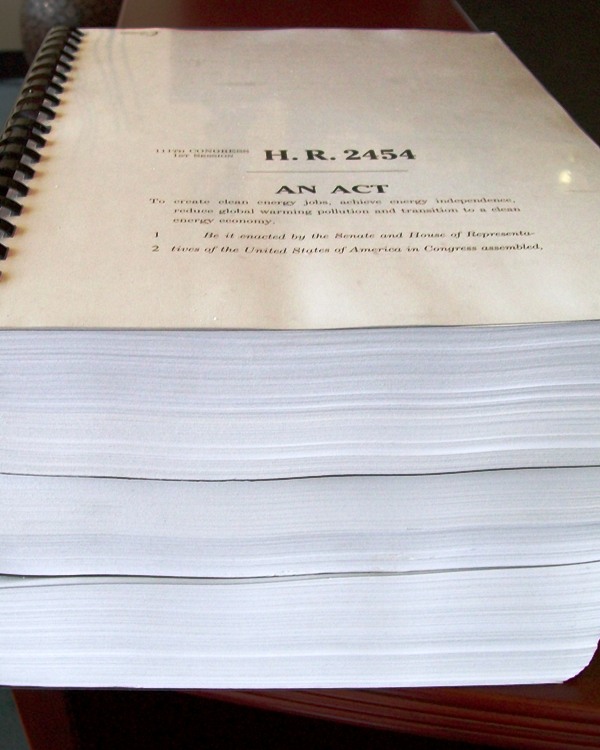 Second, we did not read through the whole bill as we still have a business to run and quite frankly, it would take me a few months to go through it. Luckily, we can read some of the digest versions and call out a few of the salient aspects of the proposed legislation that will impact manufacturers in general and metal producers and consumers in particular. We wanted to examine the specific provisions that would impact metal-buying organizations. These provisions include the following (complete list appears on the CBO’s Director’s Blog site):

We understand these provisions at first blush may appear quite positive and in combination with reduced carbon emissions, who wouldn’t be in favor of it? But there are several extremely negative aspects to Carbon Cap and Trade some of which we have previously reported on including:

And finally, we have stayed clear from the science behind global warming (because it’s such a hot potato). However, when key scientific data is suppressed from the public domain because the EPA and the Administration don’t like the findings, I can’t help but think I’m being snowed. Check out this blog post from the National Association of Manufacturing entitled: Wonder if Union of Concerned Scientists Would Retract Any of This. That post links to this article that contains the study repressed by the EPA.

Whether or not you believe the study or not isn’t relevant. Just ask yourself why your government is suppressing information from public debate.

PREVIOUS POST:
Primary Aluminum Imports up in US, Secondary Alloy Imports up in Japan
NEXT POST:
Is China's Recovery in Danger of Overheating?