Metal and Memories: Timeliness of Typewriters

Since 1967, John Sansone’s shop Los Altos Business Machines has been repairing the formerly dominant method to generate content: the typewriter. A recent National Public Radio story related that one of the shop’s loyal customers was Pulitzer-Prize winning author Wallace Stegner, whose son, Page Stegner, shared this aspect of his father’s relationship to his typewriter:

“He typed with two fingers, hunt and peckat a very rapid rate, I might add. He was missing a finger on his left hand, so he never learned to type the way the rest of us typed, but he went very fast.”

That’s one of the factors—the “hunt and peck” motion—that makes using a typewriter an engaging exercise, sometimes in futility and other times with obsessive persistence toward creating the next great story—a life’s sentence, literally. The noise of metal type bars upon ribbon-ink to paper is the struggle of mind over matter. It’s industrial chirping, achieving a kind of audio therapy, compared to the muffled finger-falls upon a computer keyboard. The sounds, however fast or sluggish, amplify the writer’s pace. It’s a challenge of wits and weights, with the typewriter’s heaviness remained stubbornly fixed in position. 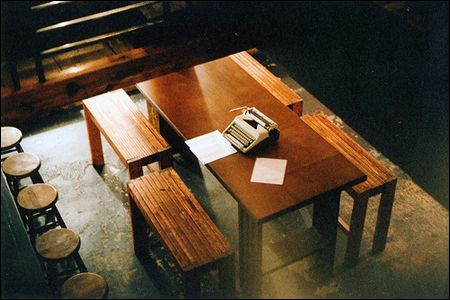 Photograph by Michael Kalus at Flickr under a Creative Commons License

Typewriters make their presence known, like a talkative relative. They’re not silent partners when it comes to family stories and secrets. Sansone testified that “Nobody ever threw them away, and they want to keep it in the family.” I recall my father’s Olympia manual typewriter, which he still keeps. Like the journey of family history, writing with a typewriter is an evolving course of correction. There’s no easy deletion when the trail of thought begins. Every decision is preserved. Today’s online breadcrumb traces its roots back to the very first typed characters, which marked a literary journey’s start toward a hopeful finish. To put a twist on author Cyril Connolly’s quote on life, the typewriter is a maze in which we take the wrong turn before we have learned to write. This is one of the insights that typewriters afford: Destination unknown.