I received a press release in my in-box the other day stating, ETFS Silver Trust (SIVR) breaks $80m assets under management in first ten days of trading on NYSE ARCA. Now ordinarily, we don’t publish generic press releases but the content of this one piqued our curiosity as the influx of dollars into this ETF are representative of this shift from demand determining market price to ETF’s playing a larger role in setting the market price.

Unfortunately, I couldn’t find a direct link to the release so we will re-publish some of the pertinent details. First, the assets under management in the ETFS Silver Trust (SIVR) exceed $80m since the fund began trading on the NYSE ARCA on July 24. The press release describes the euphoria, The launch of ETFS Silver Trust marks an historic landmark for ETF Securities and we’re delighted with the initial investor uptake we’ve seen. Initial inflows indicate to management that SIVR has captured the mood of American investors who are looking to gain exposure to silver through a cost effective, transparent, physically backed product. The press release goes on to state that the inflows since inception indicate that investors are becoming increasingly bullish towards silver.

And though this appears to be a great win for ETF Securities, the growth of these ETFs plays a big role in the price of the underlying commodities. According to Standard Bank, long positions are on the rise, signaling increased confidence. The converse could also occur ” upward moving markets could become subject to correction. Take a look at this six month chart for silver, courtesy of Infomine.com: 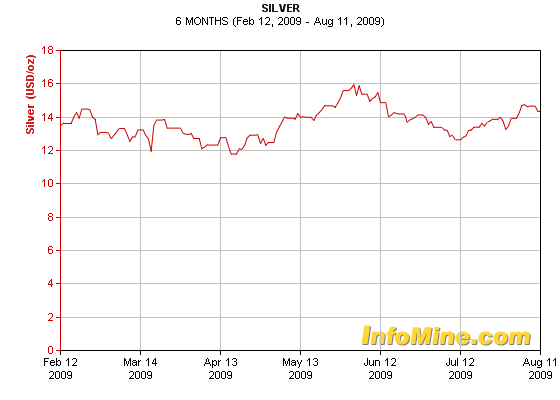 We had predicted back in the beginning of the year that silver would trade in the $9-11 range (we were obviously wrong). Silver appears to be on an upward trajectory though it appears to face some resistance at the $15/oz level. Silver behaves more like copper and oil than gold in that it has multiple industrial applications and for which when supply is somewhat limited (as it is for silver), the price can only go in one direction. The question is how high? Some are predicting it will rise higher than gold, we can’t see that but there is plenty of room for silver to go.