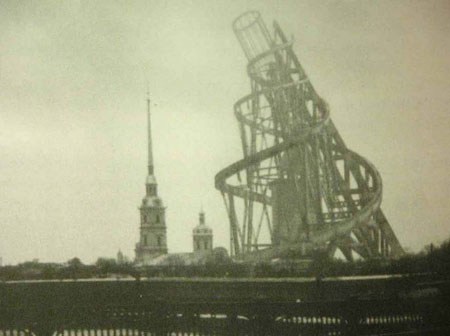 Imagine a kinetic structurecomposed of iron, glass and steelwhose main form is in the shape of a twin helix, which would ascend in a spiral at the height of 400 meters, 100m taller than the Eiffel Tower.

Intertwined within this main form are four large geometric shapesplatonic solidsthat appear suspended as part of the helix’s upward path. These geometric entities rotate. The tempo of each shape varies, like moving gears of a grandfather clock. At the base of this structure is a cube where gatherings, such as lectures and conferences, would take place. The cube rotates in the span of one year.

Above the cube is a smaller pyramid whose space would hold other meetings. Above the pyramid is a cylinder, acting as an information center, transmitting announcements via telegraph, radio and loudspeaker. The pyramid rotates in the span of one month. As an extension of the cylinder, and the structure’s highest point, is an open-air screen including a projector to cast messages into the sky. The cylinder rotates in the span of one day.

This is The Monument to the Third Internazionale. Its setting is St. Petersburg, which Russian writer Fyodor Dostoyevsky described as The most abstract and intentional city in the world. But the intentional tower designed by Russian artist and architect Vladimir Tatlin (1885″1953) remains abstract in that was never built after the Bolshevik Revolution of 1917. Nonetheless, Tatlin’s Tower keeps feeding an appetite of abstraction.

Specifically, while most might agree it’s not constructed, others suggest it is under construction. And yet another faction claims it is already built. BLDGBLOG‘s Geoff Manaugh, who covers architecture and urban issues, eloquently describes Tatlin’s Tower as follows:

The Tower is everywhere. It is something we enact, performed here in the present, indeed in the hesitations between every letter that I type. It is negatively present in the foundations of buildings, in natural crevasses carved by streams through the ice of Antarctic deserts. Even American astronaut Neil Armstrong, some have claimed, found evidence of Tatlin’s Tower impressed into the surface of the moon, an almost exact reproduction eroding there in faint stratigraphies of colorless rock. The ultimate Ã‹Å“Communist monument,’ then, if there is such a thing, is the one that we’re living inside of, the proportional numerologies that frame and contain us. The brilliance of Tatlin’s Tower was that it was already built from the moment he first designed itor perhaps I should say: transcribed it.

Tatlin’s visionary monument of movement, capturing matter and time, is a vision played out in the everyday.