I hit the lottery this weekend when a friend sent me an email mentioning she and her husband had two extra tickets to this past Sunday night’s U2 360 concert here in Chicago. I not only must thank my good friends (Val and RJ) but also my poor husband who had just arrived from the UK after a week on GMT time.   The press accounts of the concert seem pretty positive but the highlight of the show without a doubt came from this spectacle below (my apologies for the rather amateurish photos but alas what do you expect with a 5 pixel digital camera?) 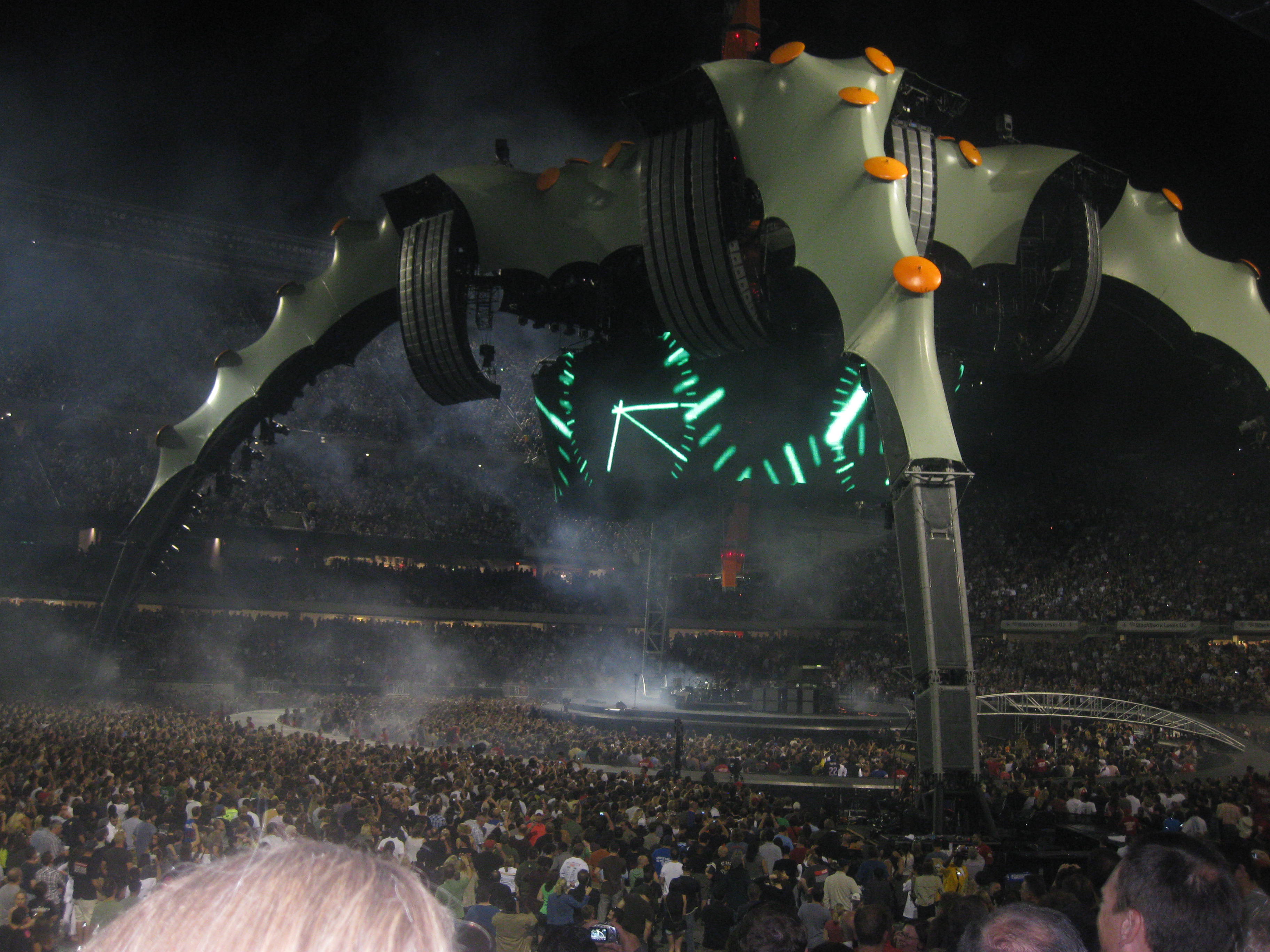 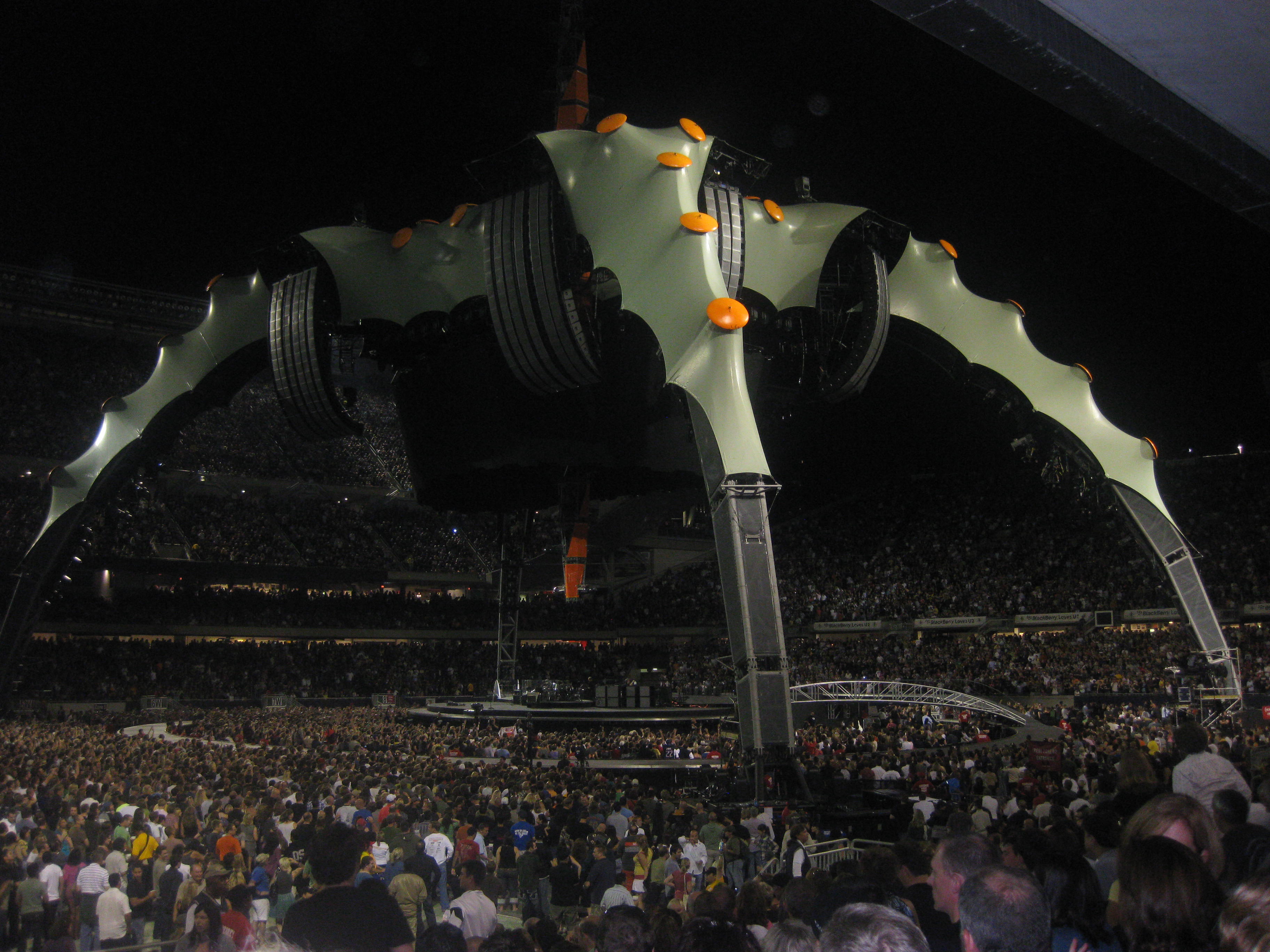 And though many a blog story focused on the irony of this group’s rather strong social conscience (they dedicated the song Walk On to Daw Aung San Suu Kyi, a Burmese activist who was sentenced to house arrest in 1989 for protesting against the oppressive Burmese government) against their rather lavish if not over-the-top stage set (David Byrne specifically discussed the carbon footprint issue on his blog site), as a supporter of the arts and of course metals, one realizes that the notion of green is somehow incongruous with what we have come to expect in terms of entertainment. I can’t really blame U2 for that. After all, the band’s intentions, according to many accounts, is to get closer to their audience.

Putting aside the carbonwaste elements of the set, from an engineering perspective, The Claw is nothing short of fantastic. We should mention there are three sets in total used for the tour. I’ve spent a little time digging up the pertinent factoids for you metal-heads:

Now let’s get to the real question everyone wants to know ¦how much did it cost to build these three structures and what is the band’s ROI for such an undertaking? Published reports suggest the cost per set is GBP 15m or $24.85m each (we’ll assume that is inclusive of the set-up crews) so the investment looks to be around $75m. According to the band’s website, there are approx 44 concerts. We’ll assume 75,000 as the average attendance (I have no idea if that is accurate) at an average price of $120/ticket (tickets in Chicago cost anywhere from $30-250). So an average show pulls in approximately $9.37m x 44 shows or $412m equating to a 5:1 ROI (of course we haven’t accounted for all of the other expenses associated with renting out the facilities, staff, accommodations etc.) so let’s say it’s a 4:1 ROI. It sounds like the band came to its decision based on good old-fashioned business sense.

And while the green criticism has merits, let’s not forget the local economic stimulus such events create – why there are meals to eat, posh hotels to stay at, security details, logistics, gas expenditures and service staff costs that all help to stimulate the economy. Of course we can’t forget our beloved deficit-ridden City of Chicago. With a county sales tax of 10.75% and assorted amusement, entertainment, loop taxes etc, there is something for everyone with this concert!