Interest in the economic exploitation of the Arctic has snowballed (pun intended) in recent years as the melting ice sheets have made large swathes of what was once the frozen north accessible.

Initially interest was in oil and gas, and then easily transportable minerals like diamonds and gold. But now the nations bordering the Arctic are looking at copper, zinc, lead, nickel and even iron ore. Thanks in large part to a new comprehensive atlas of arctic geology that has been produced by the Canadians, resolution of claims is now one step closer. After collating US$1bn of data from researchers and institutions in Canada, Russia, the USA, Denmark, Norway, Finland and Sweden, Natural Resources Canada has produced an atlas of unprecedented detail in three dimensions allowing scientists to create data cubes of sub strata formations. Although gaps remain under the central frozen pole area and in the central Greenland land mass the atlas, available so far in electronic format but from early next year in print, will allow countries to identify where their legal boundaries lie. 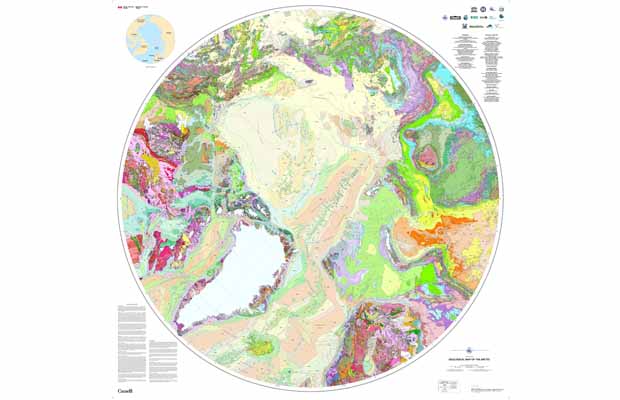 Courtesy of Geological Survey of Canada

The UN treaty stipulates that any coastal state can claim territory 350 nautical miles from their shoreline and exploit the natural resources within that zone. However landmass plate boundaries also play a part but to prove ownership nations must provide scientific proof of the natural extension of continental plates. Reported in Physorg.com Marc St Onge from the Geologic Survey of Canada said, “Our atlas shows that the Lomonosov Ridge under the North Pole where Russia planted an undersea flag last year is actually part of the North American plate,” said St-Onge. “It was once part of the Bering Sea platform which in part belongs to Russia, but it separated 61 million years ago and has since moved 900 kilometers (560 miles) towards the west. More detailed surveying of that area is required, of course, but it looks like it’s Canadian.”   (Sorry Vladimir you are 61 million years too late ” Ed.).

Being able to see in three dimensions and map how plates have moved over time does not prove the existence of minable ore bodies but it does give some strong pointers as to where they may exist according to Canada.com. For example, an island in Canada’s Arctic has formations that appear identical to rocks in Norway where there are deposits of lead and zinc. Other analysis reveals Baffin Bay contains an untested area but with high potential for natural gas in north eastern Canada.

Considerable challenges remain to mining in the Arctic such as:

At least solutions to the last point will be greatly aided by the Canadian’s map and environmental concerns notwithstanding bring the exploitation of one of the last great untapped source of metals and minerals one step closer.