With much fanfare, Ford has announced the launch of their new small car for India at a New Delhi hotel this week. It’s called the Figo (apparently Italian for cool but completely meaningless in Hindi, India’s most common language after English) and will come as a four door hatchback. Ford says it has been designed by Indian engineers and is to be built following a $500 million investment at Ford’s Chennai production plant. In truth it’s not really a new car, it’s a rehashed 5th generation Fiesta that has been on sale in the rest of the world since the earlier part of this decade. But re-design must have taken place because Ford is selling this car for an expected Rs 400,000 (US$8,350) whereas the Fiesta retails at a starting price of £8,595 (US$13,900) in the UK, so economies have been made somewhere. No details have been released on the engines but in a market where cost is all, expect something like a scaled down version of the entry level petrol engine used in Europe, a 1.25 liter capable of about 45mpg (imperial gallon) or the 1.4 turbo diesel capable of 64 mpg. Ford plans to produce 250,000 diesel engines by 2010 from their Chennai plant, many for export to other Ford plants in Asia and Europe but some will be intended for the Figo. 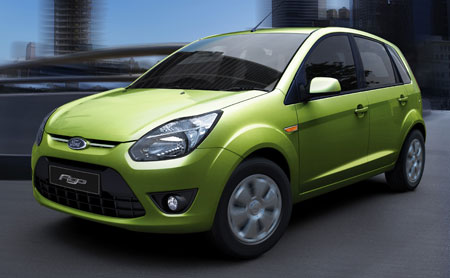 Ford is late into the Indian market as a producer of small cars which is puzzling when you look at the success of their Ka and Fiesta models worldwide, and when you consider they have worked closely (and according to local sources in a supportive manner) for many years with Indian component suppliers like forge shops. Small cars make up 73% of the Indian market according to the FT and the market is dominated by Suzuki and Hyundai, both of whom also export significant numbers to the surrounding regions. The Indian car market boomed from April to August of this year. Local car sales have risen 13% from last year ” to about 559,600, more than half of which were Suzuki Marutis, according to the Society of Indian Automotive Manufacturers. Ford expects India’s small car market will double in size over the next 10 years while CSM Worldwide predicts growth will be even faster with sales up 45% by 2011 outstripping the 39% expected for China and 26% for Brazil. India’s car exports are also surging, driven mainly by Hyundai which exports about half its Indian production, but also followed by Suzuki, targeting such far-flung markets as Europe. India’s passenger car exports surged 53% to more than 331,500 vehicles during the financial year that ended in March 2009. It has risen a further 37% so far this year.

In addition to the $3,800 Suzuki Maruti, the $6,900 Hyundai i10 and the $2,500 Tata Nano (which reportedly is selling for 30% more second hand than new because Tata cannot keep up with demand) India already has the $6,700 GM Chevrolet Spark, like the others a small 4 door 1.0 liter engine car weighing in at only 1850 lbs (850 kgs) but although given good road test reviews the car has failed to catch the headlines like the Nano. That may be about to change if GM’s tie up with electric car maker Reva takes off. GM is reported to be looking at an electric version of the Spark (wouldn’t that be appropriately named) with the drive train supplied by Reva.

For a company in Ford’s financial position, a re-designed 5th generation Fiesta probably make good sense as an entry into the growing Indian market. If the price tag is as expected, it may prove a little on the expensive side for the majority of Indian buyers but Ford’s good brand name may command enough of a premium to make it work. Certainly their investment adds to India’s position as a major automotive components and new build manufacturing hub for Asia.

PREVIOUS POST:
Aggregated Purchases, Leveraged Buys, GPO's and Rebate Programs for Metals
NEXT POST:
Water on the Moon, Magnetic Gasses and the Next Segway???