Home | Commodities | Zinc Market Forecast to Move into Deficit Through 2011

Zinc Market Forecast to Move into Deficit Through 2011

Some may wonder why the zinc price is as strong as it is when the market has been in surplus for the first half of this year and with the exception of China re-stocking, demand has been comparatively weak. Smelter utilization has dropped from 83% last year to 77.2% this year as refined metal supply is estimated to have dropped by 600,000 tons according to an HSBC report. Mines have been closed and refining capacity idled in a desperate attempt to bring supply and demand back into some form of balance. Well it looks as if all that pain has not been in vain. HSBC predicts the market will go into deficit later this year and recent ILZSG figures suggest the market may already be consuming more than it is producing as the following chart illustrates. Metal usage has been getting progressively closer to metal production and even on reduced summer month consumption figures and production has tipped into deficit. 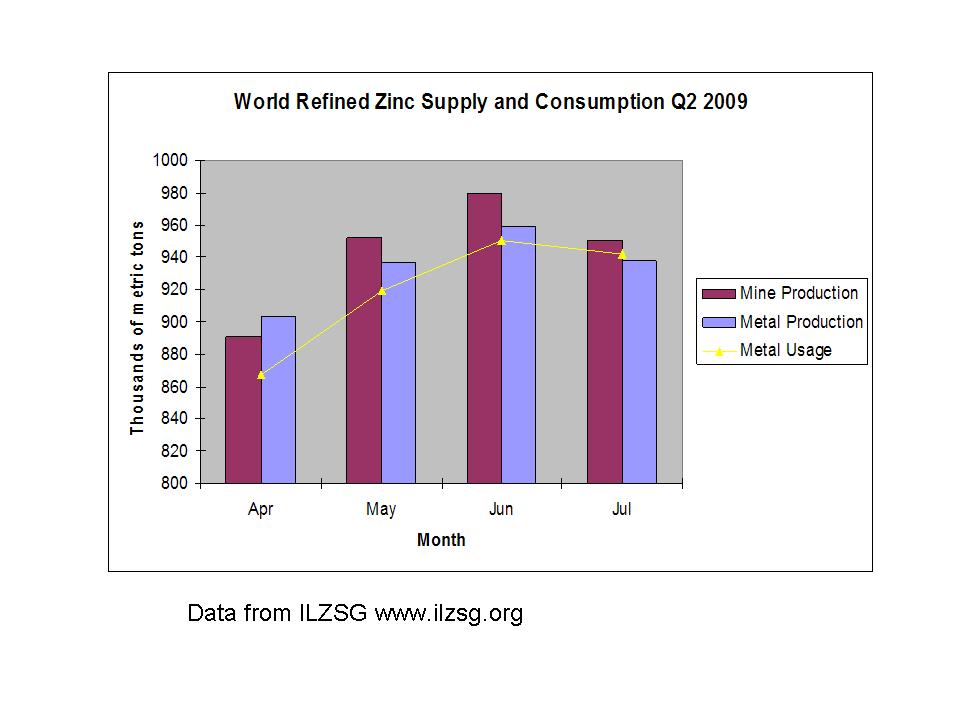 HSBC’s prediction is largely based on resurgence in demand from western economies later this year and into 2010. China has remained in y-on-y growth averaged over the months and Latin America has only dipped to single digit retrenchment. The big drop in demand was North America at 20%, Europe at 16% and the CIS at 10%, all of which are predicted to swing into growth by next year. Mills are already starting to respond to the higher prices, as Reuters reported last week. Belgium’s Nyrstar, the world’s biggest zinc producer, said it would restart operations at its Balen plant in Belgium this month after a nine-month suspension due to weak demand. Nyrstar had already resumed production in July at its previously idled Dutch and US plants.

The only mitigating restraint on additional price increases is rising stock levels. Mines are profitable at current levels so although they will take time to re-open facilities that were closed as the markets collapsed, they have every incentive to produce metal and deliver it onto the LME. The LME however is already holding over 436,000 tons and this is in addition to some 400,000 to 500,000 tons estimated by CRU to be held in China. Like aluminum, it is this stock overhang that is the break on the upside for prices, much of the China stock is believed to be held as collateral against loans but if prices were to come off it could be liquidated in which case it would come out of China and depress world prices. In a well argued report HSBC summarizes by saying they expect gradually rising western demand to push the market into deficit and as a result support prices. They are looking at an average of US$1841 per metric ton (or US$ 0.84/lb) for 2010, rising strongly in 2011 to over US$2,500 per ton (or US$ 1.14/lb) as the supply deficit bites. CRU on the other hand are keeping their options open; due to the over stock situation they say prices could collapse to US$1,200-1,300 per ton in 12-18 months time but they could rise to US$2,500-3,000 per ton in the meantime ” well that seems to about cover it!

PREVIOUS POST:
Water on the Moon, Magnetic Gasses and the Next Segway???
NEXT POST:
Alumina, Excess Capacity and Price Linkage Stable