With 80-90% of the world’s ferro chrome consumed in stainless steel production it is not surprising the FeCr market has been through a rough time. The fortunes of FeCr producers have in some circumstances been exacerbated by local problems. 45% of the world’s FeCr comes from South Africa where the strong rand, high electricity costs and disrupted electricity supply have added to producers costs following a drastic drop in both demand and price according to the Telegraph.

Market analysts estimate there was over 25 weeks of demand held in stock at the end 2008 but as demand has come back in China those stocks have been gradually consumed and now stand at a little over 10 weeks. Prices have recovered even as spot prices have taken a dip in China on slackening third quarter demand. IFM who made a loss before tax of R456m for its financial year just finished compared with a net profit of R630m in the comparable period before, is more bullish. But then when you look what the last 12 months have been like it probably can’t get any worse for them. IFM’s production halved from 205,000 tonnes of ferro chrome in FY 2008 to 110,000 tonnes in FY 2009. Other producers are in the same position. Hernic Ferrochrome the fourth largest producer is gradually re-starting its furnaces closed earlier this year as demand improves and prices pick up, says Bloomberg. This graph tracks IFM’s prices from last year and their projection for Q4, 2009: 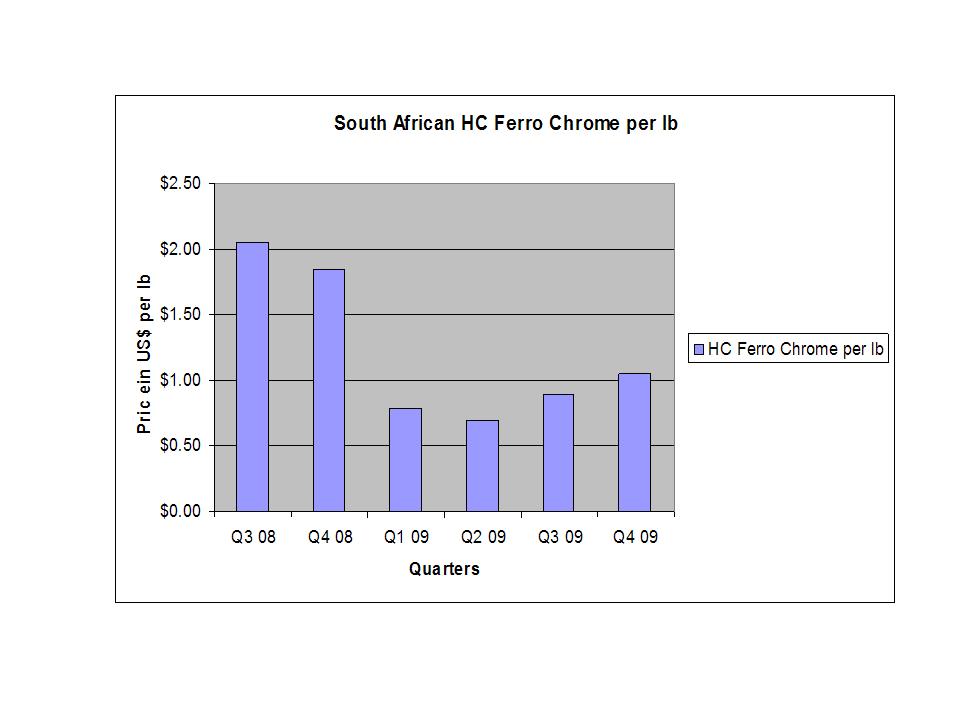 Cost structures vary but higher cost producers are probably around $1/lb marginal cost of production so if expectations of FeCr prices hitting $1.05/lb in the fourth quarter are correct we could see a rush of capacity coming back on stream. Reports suggest demand will pick up again in China later this year on increased production and in the rest of the world during 2010 as economies gradually return to growth. However no-one is projecting prices back where they were in the summer of last year, if they manage to rise above $1.00/lb still low capacity utilization will probably keep a lid on prices at US% 1.00-1.10/lb during the first half of 2010.