The Role of ETFs or ETNs on Base Metal Prices

Next week, we’ll be speaking at Purchasing.com’s Smart Sourcing Summit here in Chicago on the non-ferrous metals market. Granted, we don’t consider that particularly newsworthy. However, one subject we intend to discuss involves the role of ETFs (Electronic Trade Funds) and in particular, ETN (Electronic Traded Notes) as they pertain to the 32 base metal funds we have tracked (plus two more coming on stream as Stuart has previously reported).   As a metals sourcing professional, why should one care about ETF’s?

Prior to 2003, quite simply put, no metal ETFs existed. But that all changed when the first gold ETF launched on the ASX. The base metal ETFs launched after that. Ironically (or perhaps coincidentally) base metals began their heightened volatile state during that time period as this 15-year historical chart for copper, aluminum and zinc shows: 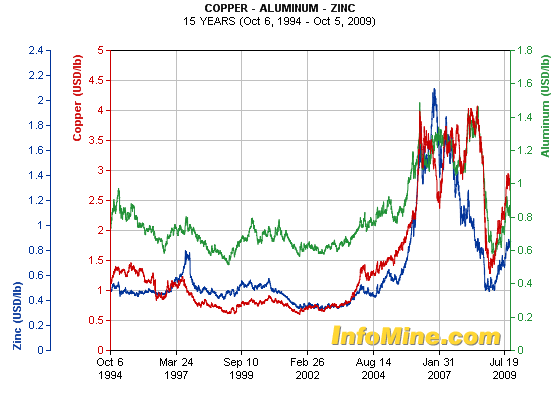 Don’t scream yetÂ¦Lisa, aren’t you forgetting about China you say? China’s super cycle also coincided with that same time period. Point noted and we haven’t run a regression to determine causality or correlation. For sure, the ËœChina factor’ plays a role as well.

The point we want to make relates to how ETN’s affect the price of base metals. We have often stated that basic supply and demand patterns appear to have less and less relevance to actual metal prices. Forecasting where prices will go remains much the subject of guesswork because the factors once used to make forecasts have a smaller statistical correlation to underlying metal prices than they once did. We ourselves have not done well this year with our base metal price predictions. And quite frankly, we don’t really like being wrong so part of what we wanted to understand involved looking at ETFs in greater detail.

We are left with the conclusion that the only element not factored into price prediction models relate to ETF’s, though admittedly we don’t subscribe to our competitor’s price predictions so we don’t know how others factor in the ËœETF effect. All we know is this demand alone would not suggest these returns from this one iPath ® Dow-Jones UBS Copper Subindex Total Return (SM) ETN:

Granted, 2009 started way off but still, copper more than doubling in value since January?
In a follow-up post later today Stuart will attempt to answer the question, can ETF’s be used as a hedging mechanism for industrial metals purchases?

PREVIOUS POST:
A Primer on Base Metal ETFs
NEXT POST:
Can ETF Commodity Backed Funds be Used for Hedging?