If you pair glass with metal, what may immediately come to mind is a skyscraper—like Willis Tower or John Hancock—both designed by Skidmore, Owings & Merrill. Or maybe Taipei 101, designed by C.Y. Lee & Partners, comes to mind. But why not a bridge, instead?

Commissioned by the Museum of Glass and the International Center for Contemporary Art, a 500-foot-long pedestrian bridge of glass and metal, made its debut in 2002. The Chihuly Bridge of Glass boasts an elevation of 70 feet and connects downtown Tacoma, Washington, to the city’s waterfront, the Thea Foss Waterway. The Seattle-based glass sculptor Dale Chihuly worked with Austin-based architect Arthur Andersson to complete the bridge, whose evolving composition inspired three large-scale sculptural installations:

Located at the eastern end, the Seaform Pavilion is a ceiling composed of 2,364 eclectic objects from Chihuly’s series Seaform and Persian. Seaforms are characterized by soft, undulating sides and rims as well as delicate, flowing forms and colors. Persians, the exotic counterpart to the Seaforms, consist of richly diverse cones, flasks, and roundels with spiraling ribbons of color: 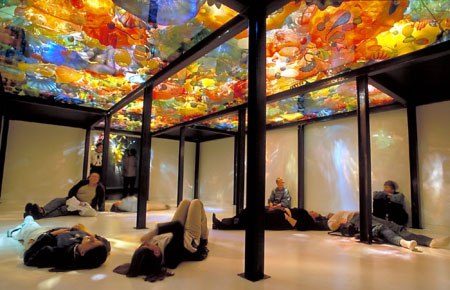 The center of the bridge is marked by the presentation of Crystal Towers: 63 large crystals in each tower, composed of Polyvitro, a durable polyurethane material developed to withstand the elements. The structures glow at night: 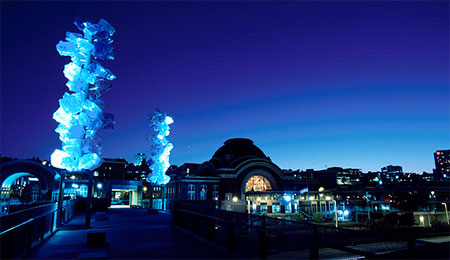 Located at the western end, the Venetian Wall is an eighty-foot installation displaying 109 sculptures based in three of Chihuly’s series: Venetians, Ikebana, and Putti. Put together, the Wall offers a unique opportunity to see how one sculptural series inspires another. The Venetians are exuberant sculptures with roots in Venetian Art Deco glass. Ikebana are quiet pieces in the spirit of traditional Japanese floral arrangements. Putti were popular figures in sixteenth-and-seventeenth-century European art and represent Cupid in Roman mythology.

In an interview for Garden Design Journal (February/March 2002), Chihuly described glass as “transparent, hard to understand. It is formed from sand, fire and human breath—it is the cheapest material and yet the most magical.” The “gateway to the city” possesses the dominant and magical medium of glass, incorporated into a structure of concrete and painted steel.

Nate Burgos is a designer who is ever curious about design and designing at Design Feast. Descriptions and images of bridge from Chihuly.com.