Aluminum the Key to Travel Between the Stars

A novel use for aluminum is unlikely to move the market by virtue of the volumes consumed or generate thousands of jobs if the technology proves practical but it could open up the possibility of travel between the planets and even between the stars. We speak of Aluminized Mylar, an extremely thin polyester film coated on both sides with aluminum metal, used conventionally in alpha and beta particle radiation detectors as a light-tight radiation window, but being used experimentally in a privately funded project to create a solar sail. 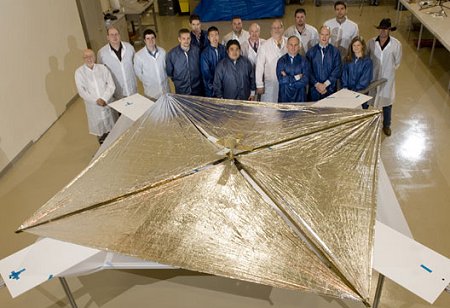 LightSail-1 is being funded by the Planetary Society founded by Carl Sagan the late astronomer and author in 1980 and Cosmos Studios of Ithaca, New York. The inital two, possibly three flights have been privately funded by an unknown benefactor according to an article in the NY Times. The first launch is scheduled for this time next year and will involve deploying a small craft made up of three cubes each about 4 on a side, one containing electronics and the other two the sails to be deployed once in space. The whole craft weighs less than 5kgs (about 11lbs) and the sails when extended will be some 18ft on a side formed from four triangles coming together as a square. When used in industry, the Aluminised Mylar is so thin it has to be doubled up to ensure it is light tight because at 2um Al coating on a polyester film a quarter as thick as a plastic bag it cannot be guaranteed to be pinhole free. But as a sail designed to catch the pressure of billions photons streaming from the sun a few photons more or less won’t be missed. According to an earlier NASA article this first mission will be to a low earth orbit, planned primarily to see if the sail will satisfactorily unfurl and to try and measure the force of the suns rays on the sail. Later flights will go further out into space.

As the NY Times article explains, the solar sail receives its driving force from the simple fact that light carries not just energy but also momentum, as can be seen by the tail of a comet which consists of dust blown by sunlight from a comet’s core. The force on a solar sail is gentle, if not feeble, but unlike a rocket, which fires for a few minutes at most, the force on a solar sail is constant. Over days and years a big enough sail, say a mile on a side, could reach speeds of hundreds of thousands of miles an hour, fast enough to traverse the solar system in 5 years. Riding the beam from a powerful laser, a sail could even make the journey to another star system in 100 years, that is to say, a human lifespan. This is what is driving the scientists behind this project and what is making it possible is the properties of aluminum and ultra thin plastics. Their challenge will be developing sails that can unfurl from the current square yards to possibly a square mile or more. As we know from the days of sailing ships, the bigger the sail the faster you go.