In the face of massive inflows of funds via ETF’s, futures exchanges and even on occasion physical stockpiling as a hedge against dollar devaluation and inflation, John Kemp wrote an article in Reuters this week completely debunking the basis of this investment philosophy. Not all such investments of course are intended as a hedge. Much is simple pursuit of profit in the belief a bull market has further to rise but there is still plenty of money flowing into gold, oil and metal commodities in response to fears that the dollar will continue to devalue and that eventually inflation will take hold as lax monetary control feeds asset bubbles. John Kemp’s analysis is simple and succinct, look at history he says, at the correlation between the dollar and the price of oil or copper or aluminum. He provides graphs to help us along the argument: 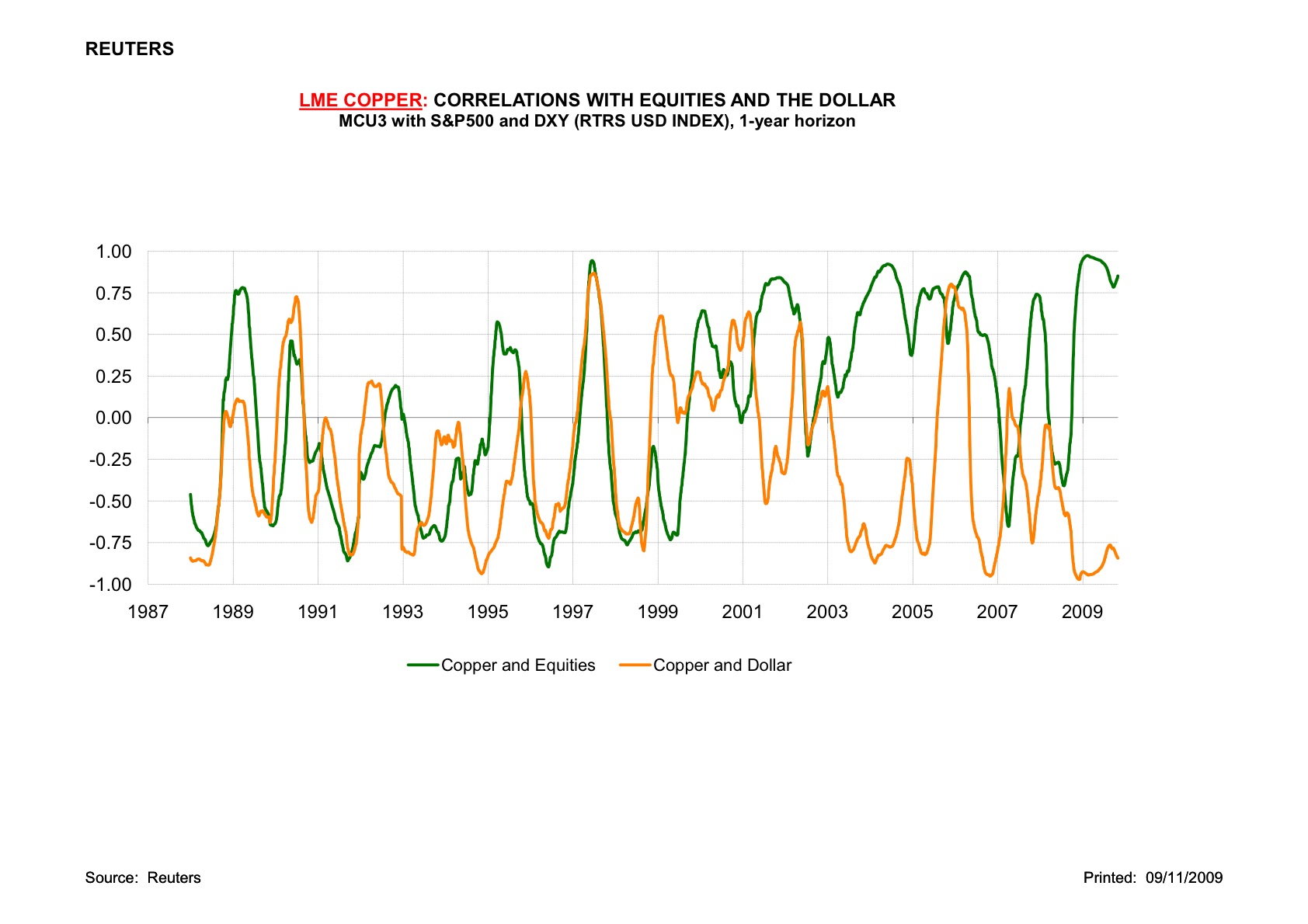 His argument, and probably by extension the trap into which investors fall, is that at times there is a good level of correlation but that it is cyclical in nature lasting on average some 2-3 years before the correlation falls apart and undermines the value of the investment approach. The charts show correlations (evaluated over one-year and three-year periods) between raw materials prices (in these examples crude oil, copper and aluminum) and major macroeconomic variables (equity values, medium-term bond yields and the dollar’s trade-weighted exchange rate).

Although Kemp doesn’t explore the point he makes in the closing paragraph about forward dated ETF’s in any depth it does bear further evaluation here. If the investment is forward dated ETF’s the contracts are based on buying metal one month forward on a futures exchange such as the LME. For aluminum and copper both in contango situations, that means the fund pays a premium for one month dated metal, then sells it close to spot as the date approaches and buys again one month forward. The fund is constantly rolling these positions and losing out on the spot to one month premium inherent in a contango market. If the market is rising strongly that loss can be absorbed but in a market trading sideways or exhibiting a degree of fluctuation either side of a mean as we have had since the summer, these differences add up over time detracting from the overall return in the medium term. The youthfulness of these investment mediums means we don’t have a long track record to measure returns either against the underlying commodity or in the case of John Kemp’s argument for their effectiveness as hedges against dollar devaluation or inflation but his article certainly gives food for thought for anyone interested in this market.

PREVIOUS POST:
Will 3PL's Handle Your Entire Back Office?
NEXT POST:
Bahrain Runs Out of Hydrocarbons and Goes Looking for Solar