Steel By the Numbers

The World Steel Association published global crude steel production numbers late last week. Global production for the month of October increased 13.1% from October of last year. But overall, total global steel production fell by 13.5% for the first 9 months of 2009 vs. the same period in 2008. Not surprisingly, all of the main developed market economies posted production declines from a year ago (e.g. US, Japan, Germany, South Korea) whereas most of the emerging economies including China, Russia, Turkey, Ukraine all posted increases from year ago numbers. The world steel capacity utilization ratio averaged 76%. The low point hit in December 2008 at 58.3%.

And though the macro picture looks somewhat positive, several other data points suggest China has overcapacity and high stocks. And though steel production in China has increased across the board, stocks have increased to 12.03m tons according to the American Iron and Steel Institute up 7% from September. We know anecdotally that some large manufacturers have at least three months worth of raw material stock.

We see the stock position has begun to impact price levels as our own MetalMiner IndX(SM) shows some downward price trends. However, prices in late October, early November have started to increase again: 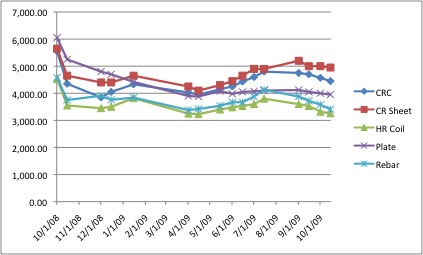 Did you know that MetalMiner publishes daily global metal prices free of charge via MetalMiner IndX(SM)? You can register to view prices here.

Chinese mills raised prices for December orders. Domestic mills in the US are hoping for some price increases as well as AK Steel led the price announcements back in the spring and have also just announced late last week they will increase the price of hot rolled products by $20/ton and $30/ton for cold rolled products starting January 1. We remain unconvinced that price increases will stick as manufacturing orders came down in October relative to September.

A few more metal statistics worthy of mentioning include:

In addition to these developments involving steel products and international trade, US lawmakers have requested the Department of Commerce investigate China’s currency manipulation, following President Obama’s trip to China last week. Republicans and Democrats drafted a letter requesting the action which could subject the Chinese to stiff penalties according to this news release posted on the AISI website.

All eyes on the Department of Commerce as it decides whether or not to open up an investigation on currency manipulation. That not only would have quite an impact on metals markets but for all US-China international trade.