In the near South side of Chicago is a park where one can find themselves in the company of 106 iron cast figures. Entitled “Agora, the Greek word for a place of gathering, the outdoor installation gives the sensation of what sculptor Magdalena Abakanowicz calls “the countless.

“My work comes from the experience of crowds, injustice,
and aggressionÂ¦

Abakanowicz’s fascination with crowds is rooted in the experiences of her native Poland, which was entrenched during World War II, then the Soviet occupation. Visions of marches and exodus, even pilgrimages, align themselves to the surround sound of footfalls. The timbre of the masses is unmistakable. 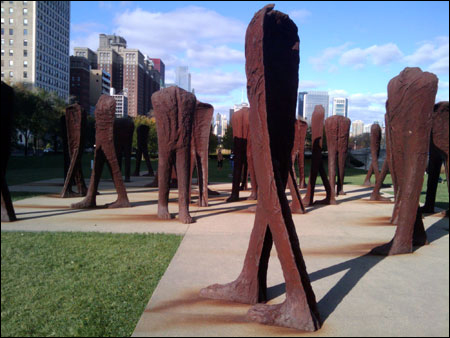 Standing nine-feet tall, the figures were cast during 20032006 in Srem Foundry near the city of Poznan, Poland. Each hollow figure was hand-molded by the artist and her assistants. The texture resembles bark. Akin to the spatial geometry of Richard Serra’s formidable sheet-metal contortions, “Agora provides another opportunity to experience one’s place in the geometry of movement: at times as congregation and at other times, dispersion. 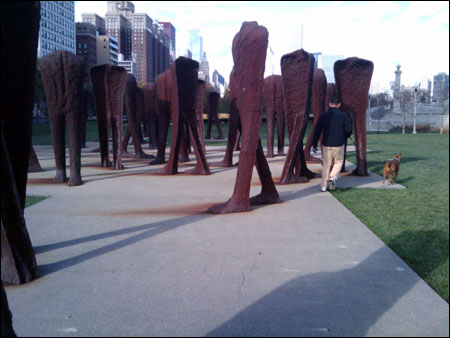 When the figures were arranged per markings in 2006, Abakanowicz stressed that “They must be like one body that represents so many different meanings. Visitors bring their storied dossier of movement to Abakanowicz’s assemblage, which prompts meanings of obscurity, solitude or solidarity. Turning your back on the crowd remains an option in this artist’s Agora.

Images by the author