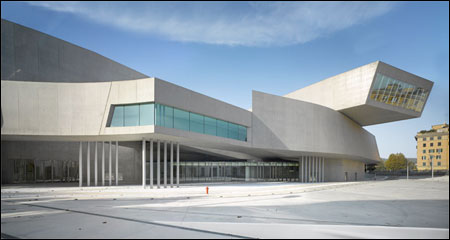 In November 2009, MAXXI_National Museum of the XXI Century Arts (image above) opened to a much publicized architectural preview in Rome, Italy. The contemporary art museum was designed by Zaha Hadid. In a similar act of architecturally nurturing, notably in a city setting, the Design Museum Holon (image below) is set to open in Israel on January 31, 2010. It is designer Ron Arad’s first built project of its scale. From its founders:

“The establishment of Design Museum Holon is a high point in the ongoing process of transforming the city of Holon into an epicenter of culture and education. Over the past decade, the city has introduced a wealth of edification programs, launched cultural festivals, opened new museums and introduced urban art installations, all leading to the enrichment of municipal life. 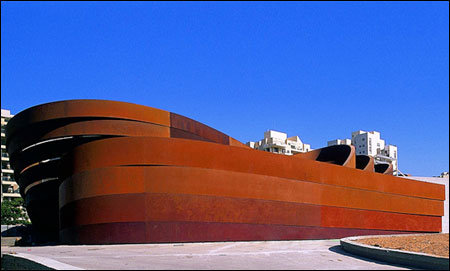 The strength of this statement coheres to the grand hopes for MAXXI by its founders:

“The MAXXI aims at becoming a national point of referenceÃ‚Â  for public and private institutions operating in Italy and abroad, as well as for artists, architects and the general public. The museum pursues an exhaustive evaluation of the present, delineating a constantly updated framework of the development of 21st century art and architecture. 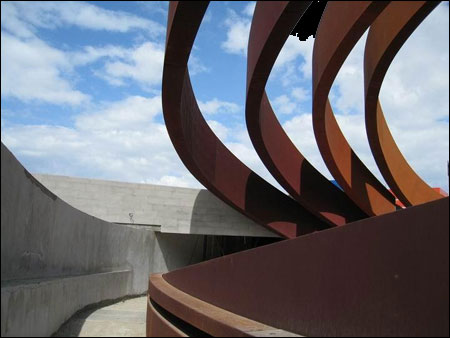 Supporting the “high point quality of its text, Design Museum Holon’s highly visible element is its steel (image above). Ron Arad expresses its art and utility this way:

“The notion of creating and exploiting the tension between an internal arrangement of efficient box-like spaces, and the dynamic and curvaceous external envelope, became the guiding design principle for the entire museum. The greater part of the museum’s external appearance (from all but the south faÃƒÂ§ade) is shrouded by five dominant bands of weathering-steel (Corten) structure which undulate and meander their way in, out and around the museum’s internal volumes, at times in unison, at others apart; at times enclosing space, and at times notionally defining it.

The Corten bands act as a spine for the buildingâ€both supporting it structurally and dictating its posture in relation to its surroundings. The horizontality of the bands layout is further accentuated by a gradation of chemically accelerated patinas and the subsequent weathering of the steel over the lifetime of the building, both of which echo the topographic character of the open Israeli terrain in the urban context.

The use of steel echos in Hadid’s MAXXI (image below), as reported by designboom:

“the vertical blades that characterize the roof system are realized in steel and covered with a finishing material. the glass roof is protected on the exterior by a steel mesh that screens light and ensures easy maintenance. all vertical columns including the columns supporting the cantilevered volumes are constructed in steel. 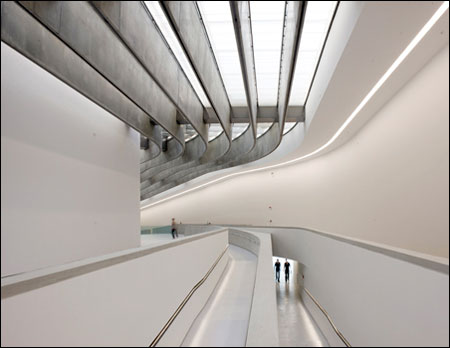 Rome and Holon are two examples where people are striving to lift the well-being of a city, its population and its direction into the future. The element of metal, both as raw building material and symbolic gesture, again plays a small but integral part in realizing a place’s genuine aspirations.

PREVIOUS POST:
China Looking to Close Hundreds of Steel Mills
NEXT POST:
Ada Lovelace, Charles Babbage and The Difference Engine that Made a Big Difference