Sound of Metal: Steel Strum with A Trussart Steel Guitar

Guitars, like wine, can be aged. One way is by constant use. Another way is by way of deliberate weathering. The latter is the art of James Trussart, who founded James Trussart Custom Guitars in 1980, making custom guitars that exude the beauty of age. As Trussart put it:

“I’ve always liked the look and feel of old guitars, believing them to have a life beyond that of their creator. And I wanted to somehow emulate that effect of age and history on my own guitars. I wanted to make a guitar that came with a history and a slight element of neglect, of decay, so it had a personality of its own.

Trussart’s versions of one of the world’s most popular stringed instruments, innovated by visionaries like Les Paul, are truly custom. It’s in their material. A Trussart Guitar is made of steelâ€which serves as the prefix of product lines such as SteelCaster, SteelMaster and SteelDeville. No matter the category, the guitar embodies the Latin phrase “mens sana in corpore sano: a sound mind in a sound body. Resulting from Trussart’s intensive craftsmanship, the body and sound are distinct. And when combined with the mind of its creator and the one playing it, the result is a truly singular instrument. 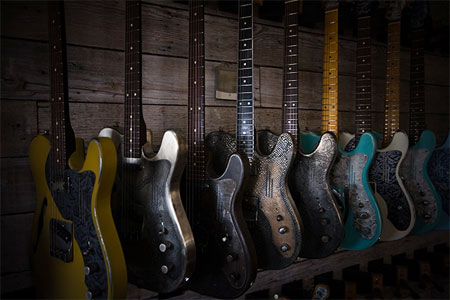 “SteelCasters line the back wall of Trussart’s shop. They’re his biggest seller. Aside from the steel bodies and engraved finishes, they look just like the Broadcaster that Leo Fender introduced in 1949. Caption: Chuck Squatriglia, Wired.com; Photo: Jim Merithew, Wired.com

Besides their material, Trussart Guitars can be further customized with various finishes. Guitars ordered without paint are left to rust before being a satin clear coat is applied. This technique was dubbed “Rust-O-Matic by Billy Gibbons, founding member and lead guitarist for blues-rock band ZZ Top, who described his Trussart Guitar this way: “The tone is the thingÂ¦and this instrument has got some tone. Former Guitar Player magazine editor and guitarist Joe Gore expressed the unique tone of Trussart’s SteelCaster with the following:

“I literally believe this guitar makes me play better. I love the combination of ultra-articulate attack and full-bodied sustain. It’s almost as if one is playing through a high-quality compressor, only without sacrificing a shred of transient impact. The subtle metallic resonanceâ€that extra midrange peachinessâ€telegraphs articulation details. I play predominantly with my bare fingers, and I’ve never before encounter an electric guitar that communicates the texture of skin, nail, and combinations thereof with such breathtaking immediacy. I also find myself better able to Ëœshape’ notes. I think that’s dueto: a combination of the guitar’s innate sustain, the perfect fretwork, the way subtle neck bends complement finger vibrato, and the gratifying Ëœfeedback loop’ created when the metal body hums against your chest.

In his story about the “maverick guitar builder for Wired.com, Chuck Squatriglia wrote “Trussart’s creations look like vintage American guitars, but their bodies are stamped in France. The steel is 1 millimeter thick and often engraved with ornate patterns once it arrives in L.A. A Trussart Guitar’s cross-ocean production reflects the maker’s move from France to L.A. in 2000. Trussart’s business of making custom guitars was organic. Trussart is a musician himself, having performed with Cajun singer/songwriter Zachary Richard during the 1970s. He also spent many years as a luthier, repairing violins before shifting his focus to guitars. 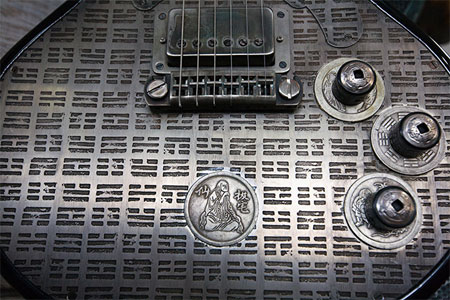 Trussart admits that his steel guitars aren’t for everyone, which is a good way to operate. Because pleasing everyone means failure. This is one more reason why a Trussart Guitar is an object whose thoroughly handcrafted beauty, from the inside out, never fails.

PREVIOUS POST:
What the Uncommon Economic Indicators Tell Us About the Economy
NEXT POST:
Economist Poll Supports Economy Rebounding Strongly in 2010