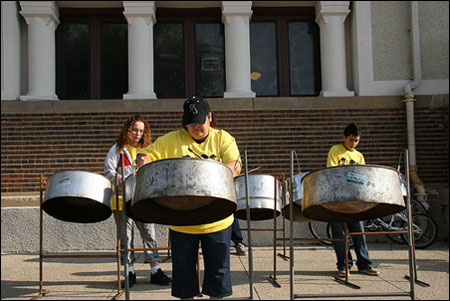 For her new fourth album “Normal as Blueberry Pie, Nellie Mckay pays tribute to singer and actress Doris Day. One of Day’s most endearing songs remains “Sentimental Journey. The singer-actress released the hit in 1945â€an important time that saw the end of World War II. The song soon became a special, associative part of American life as veterans made their returns back home.

Mckay’s take on Day’s popular-turned-ubiquitous song incorporates new layers of instruments like saxophone, oboe and bass. Another sound particularly woven into the new version’s flow is the percussion of the steel pan. Surprised? I was. And it was refreshing to hear a classic piece of music imbued with a musical quality having both a distinct form and sound.

Steel pans are also called drums but are actually idiophones, like the xylophone. They originated in Trinidad.Ã‚Â  The traditional material used to make them was an oil barrel, but their current construction strays from its origins:

“Today, with advancements in technology and sound development, many steel pan drums are made from sheet metal between .8 mm and 1.5 mm thick. This allows the maker to create a more accurate, more specific sound based on preferences. The metal is bent into a bowl shape, and then the notes are sketched out before hammering them out. Using a tuner, the maker will then fine tune each note. *

Steel pans have expanded from their role in folk music festivals and Calypsos to Broadway and Jazzâ€and now a delightful place in Day’s timeless song, as interpreted by McKay. Steel pans sweeten the journey with an entirely new and inviting sentiment.

PREVIOUS POST:
Copper Price: The Source of Both Problems and Opportunities
NEXT POST:
Steel Production in India