Home | Uncategorized | One Metal to Rule Them All: Mythic Metal Mithril
Commentary

One Metal to Rule Them All: Mythic Metal Mithril

In J.R.R. Tolkein’s trilogy The Lord of the Rings, Dwarves were great metalworkers and smiths. The particular material they actively mined and admired was Mithril. In the first book, The Fellowship of the Ring, the wizard Gandalf marveled at its substance and sheen:

“Mithril! All folk desired it. It could be beaten like copper, and polished like glass; and the Dwarves could make of it a metal, light and yet harder than tempered steel. Its beauty was like to that of common silver, but the beauty of mithril did not tarnish or grow dim.

In the same book, the hero-hobbit Frodo Baggins inherited a piece of clothing from Bilbo Baggins, who later adopted him. The same piece of clothing was given to Bilbo from Thorin Oakenshield, a leader of the Company of Dwarves in the trilogy’s prequel The Hobbit. The piece of clothing was “small shirt of mail made from mithril. Though small in size, it was light, strong and impervious; having protected Frodo in his dangerous quest to destroy the Ring of Power. 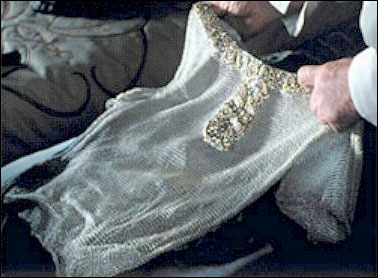 Image of the shirt of mithril from the movie The Lord of the Rings: The Fellowship of the Ring. Source: Fictional Metals That Are Made Of Pure Awesome

The name mithril consists of two words in the Elvish language of Sindarin: mith, meaning “grey, and ril meaning “glitter. Compared to actual metals, its substance is likened to titanium and lack of tarnish likened to platinum. Highly durable, resilient and polished. Mithril would have been on demand in the metals industry.