A business model new to the UK called Cashmygold has proved very successful during a year of recession. The company advertises on television urging viewers to send in their old gold jewelry for quotation, if you like the quote they send you a check, if you don’t they send back the items. Needless to say with a high gold price and a deep recession, business has been brisk and the company has just released certain statistics regarding the grades of gold received during 2009 that are summarized in the following map. 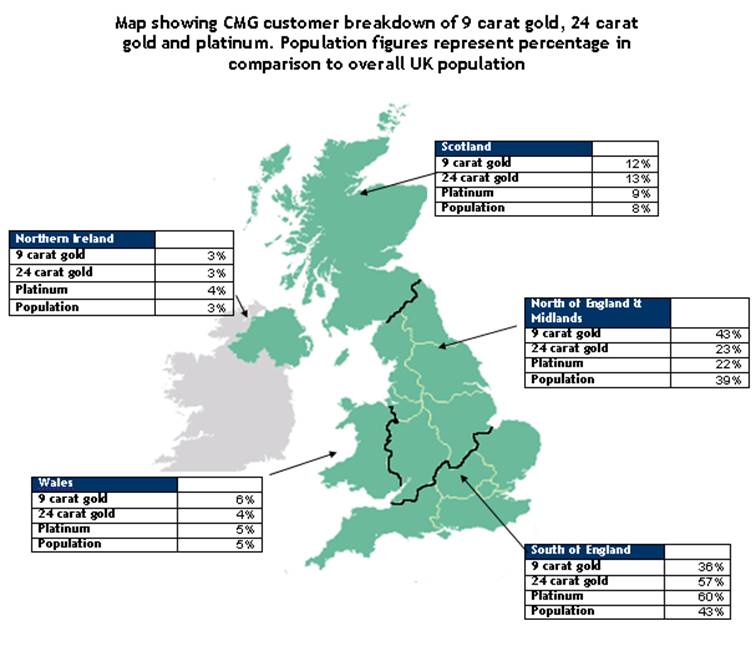 Reproduced courtesy of the Telegraph Newspaper

Like many countries, the UK has a geographic social divide resulting from a historical focus on manufacturing, agriculture and financial or commercial services in different parts of the country. The UK is broadly split north-south, with manufacturing in the midlands and the north and financial services in the south centered on the capital. Cashmygold found the gold grades perfectly matched this pattern with 57% of top quality 24 carat coming from the south whereas just 23% came from the midlands and north, with the balance from Scotland, Wales and Northern Ireland. The reverse was true for low quality 9 carat gold where 43% came from the midlands and north but only 36% from the south.

No such evaluation was made for those individuals looking to melt down their gold mouth braces however. Dentists are reporting that clients are increasingly asking to keep their braces at the end of their treatment and converting them into small items of jewelry or have them melted down. Dentists use gold-plated stainless steel braces for patients who are allergic to nickel. About 8.5g of gold is used to make the brackets and wires according to an orthodontist in London, “There is a rule that, if it goes into the mouth, it is the property of the patient. As gold prices have risen they have become increasingly valuable financially as well as medically.

Investors in Electronic Traded Funds (ETF’s) would appear to be making the same cash in now judgment that those looking to sell their old jewelry or melt down their braces. Goldman Sachs is quoted in a Telegraph article as saying demand for gold ETF’s is “rather muted”, adding: “The holdings of gold ETF’s have been essentially flat over the past six months at around 47m ounces. Should the investor demand for gold not return to the market this year, upside for gold prices would be further limited.” Even so the bank is still forecasting gold at US$1350 per ounce by year end largely on the premise that the US Federal Reserve will not put up short term rates in 2010 (or even in 2011). Along with Standard Bank, Goldman’s put their money on platinum and palladium this year, partly due to their greater exposure to a recovering industrial sector and partly due to the launch of physically backed platinum and palladium ETF’s. Competition for investors’ money will, the bank says, be relatively good for platinum and palladium but bad for gold.

Now where did my wife hide her jewelry boxÂ¦.?