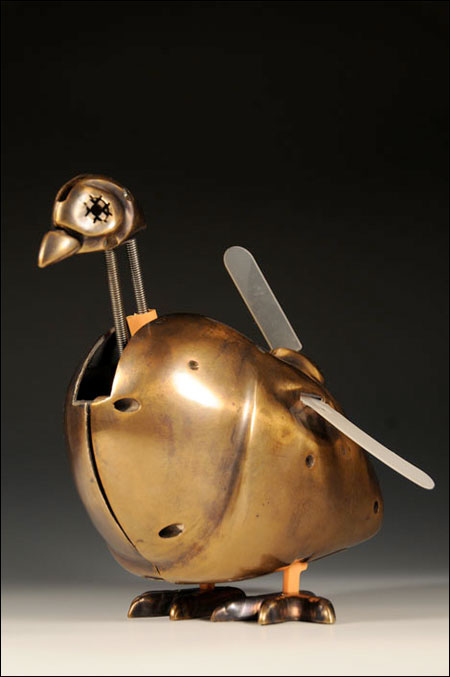 “As a multi-media artist with a strong background in metal design, I am seduced by the limitless potential of silver, copper, and stainless steel. My enthusiasm for the techniques and traditions of metalsmithing is rivaled only by a wild preoccupation with mechanical toys and the discrepancy between the public’s perception of an imagined techno-future and that future that we now inhabit.

McClure “un-stuffs objects, exposing their underlying nature. The stuffing embodies the thickness of layersâ€the “marketing identitiesâ€obscuring an anatomy with additions judged unnecessary. McClure’s material objects are pared down to their essence, stripped of what makes them appear materialistic. According to McClure, the underlying plain object “embodies more potential for my imagination than the stuffed object. 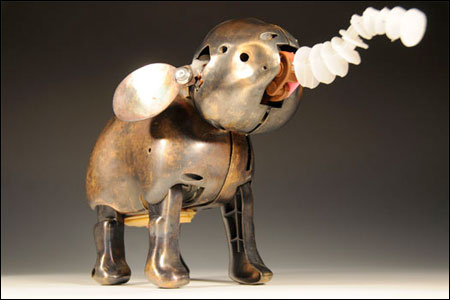 There’s a hint of alchemy in McClure’s work, taking mass-produced, disposable stuff and transforming it into a delightful curiosity. See her converted and metal-casted no-frills objects in action. As T Magazine’s Pilar Viladas puts it, McClure subtracts “the plush motorized creatures’ furry coats and fluffy stuffing and then casts the animals’ plastic bodies and limbs in bronze, while leaving most of their mechanisms intact but exposed. Sounds like a detox program. What’s left looks bare but invites the imagination, in McClure’s words, “to the magical quality of flipping frogs, drumming monkeys, and slowly turning carousels.

Images by the Artist