So says Toyota Motor Corp. in its latest news announcement involving its plan to fix accelerator pedals on recalled cars. According to the diagram below, Toyota believes the cut steel bar will reduce friction, but according to comments left by readers on Toyota’s own website, many appear to question whether the proposed fix will do the trick. 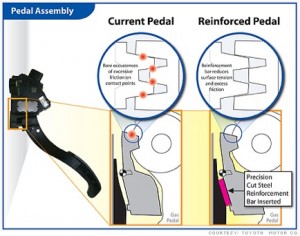 Some also question whether or not the solution involves a mechanical fix (solved by the steel bar) or an electronic one as others claim, according to law firm Rochon Genova LLP in Toronto regarding the electronic throttle system called ETCS-i. For those of you “Car Talk lovers (and I have to admit that even if you aren’t a car enthusiast, their show is terrific), they had an interesting Q&A dialog with a reader who wrote in on a similar issue involving sudden acceleration with their 2004 Subaru Outback in April 2005:

“Do you know of any sudden-acceleration problems with Subaru vehicles? My 2004 Outback suddenly accelerated, on its own, while my foot was on the brake. I had to stand on the brake to avoid surging ahead into traffic. It continued at super-high revs when placed in Park, then subsided on its own. The same thing just happened to my husband, under the same conditions. Subaru claims ignorance, even though I found several similar complaints online. I am taking it to the dealership tomorrow, but wondered if you have any clues as to what could have caused the problem. Jaye

And though Tom and Ray pointed out the obvious potential issues (similar to those put forth by Toyota such as a stuck car mat), in this dialog, they suggest some other issues:

“TOM: Another cause of unintended acceleration is an old-fashioned sticking throttle. In fact, Subaru had a problem on some six-cylinder Legacys (only six-cylinder models) and WRXs a few years ago where the cruise-control cable would come out of its track and jam the throttle cable. There’s a Technical Service Bulletin for this, and it’s fixed by adding a retaining clip for the cruise-control cable.

RAY: And then there are the more mysterious causes of “UA.” These are the cases in which the computer is suspected. The fact is every car built these days has computerized engine controls. One of those controls allows the computer to open the car’s airway beyond the throttle.

TOM: This allows the computer to adjust the idle speed when, for instance, the air conditioner comes on and draws power from the engine.

RAY: But since it can adjust the idle speed on its own, it — theoretically — has the ability to malfunction and cause unintended acceleration. Unfortunately, it’s notoriously hard to diagnose unless your mechanic can actually catch it in the act.

TOM: And as we said, this can happen on any modern car, not just Subarus.

This post we ran back in November on Toyota’s Fall from Supply Chain Grace appears prescient. Let’s hope for Toyota’s sake, the new fix works!