China Has a Competitor to Boeing and Airbus

A BBC News report from the Singapore Air Show this week showcased a new Chinese airliner called the C919 due to be launched in 2016. The manufacturer is Commercial Aircraft Corporation of China, or Comac, China’s answer to Boeing and Airbus. The c919 is aimed squarely at the market currently dominated by Boeing’s 737 and the Airbus 320. Before anyone starts snickering that an emerging market could challenge such technologically sophisticated and well entrenched market leaders let us not forget most if not all of the technologies needed to make modern commercial jet airliners are available for sale from western suppliers to the same behemoths. 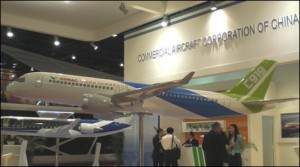 Western firms like Rockwell Collins, General Electric and Honeywell are queuing up to supply inertial navigation systems and advanced flight control equipment. Comac has already taken 240 orders for a twin engine regional jet called the ARJ-21 to domestic clients. China has spent billions with Boeing and Airbus during the last decade and with the Asian market growing faster than any other they clearly feel there is an opportunity for them to cash in on that demand.

The recent sale of military equipment to Taiwan has if anything helped the domestic aircraft industry. If China takes retaliatory action against the likes of Boeing, as has been threatened, and Boeing is banned from selling aircraft to domestic airlines it opens the door for Comac to take over in what has become the hub for the largest aviation market. The International Air Transport Association said at the Singapore Air show this week that Asia-Pacific air passengers numbered 647 million last year, surpassing North America’s 638 million and Europe’s 601 million.

Comac is not alone in having aspirations to service this rapidly expanding market. The Aviation Industry Corporation of China, or Avic, is in the process of developing the MA700, a four-engine turboprop regional airliner.

None of these offerings will be for delivery until 2012 on the ARJ-21 and 2016 for the C919 possibly longer if Chinese firms hit the same problems western manufacturers have done with new models. But the Chinese are unlikely to be going for cutting edge designs or developing new technologies. They will more likely work with existing technology and leverage low capital and labor costs to bring a product to market that can compete on price with established producers. If P&W, GE and Rolls-Royce are as keen to sell them engines as they are or previous business there is no reason why fuel economy or running costs should be materially less than a western plane. No doubt Airbus saw this coming when they started production of the 320 in China. How competitive the Chinese assembled 320 will be compared to the C919 remains to be seen.