Home | Ferrous Metals | The Problem with China's Steel Industry…Part One

The Problem with China's Steel Industry…Part One

China has rapidly become the largest steel producing country in the world, but it would be a mistake to look on it as a single entity even though we commonly refer to China’s steel producers in that way here on MetalMiner. According to the World Steel Association’s report dated January 22, global steel production contracted last year by 8% to some 1,220 million metric tons of which China produced 567.6 million tons or some 47% of global production. As this graph shows the headline figures don’t show the growing disparity in where steel is made and that is production has contracted in most markets but increased in China during the recession, down 21.1% in the rest of the world but up 13.5% in China. 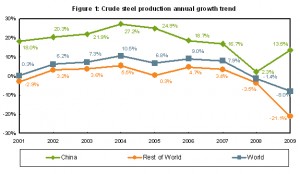 Under the pressure of repeated policy statements, government encouragement and downright coercion the major steel mills in China have undergone some consolidation over recent years. Although the industry has continued to grow in size, the number of steel mills has dropped from 500 in 2005 to something over 400 today according to steelhome, a Chinese domestic steel market website.

According to the chinese steel specialists www.steelhome.cn/en State owned steel mills while producing 55% of the nation’s output have lowered production capacity in recent years as private producers have expanded in size from just 10% of the market in 2000 to some 45% today. But there has been little or no mergers among the majors. Most mills prefer to expand organically building new greenfield plants encouraged by cheap bank loans, low cost land and minimal environmental or planning restrictions. The top four Chinese mills and the top 10 Chinese mills make up a lower percentage of total production today than they did in 2000, see chart below.

In a follow-up post a little later this morning we’ll look at some of the problems fragmentation causes China’s steel industry.

PREVIOUS POST:
China Has a Competitor to Boeing and Airbus
NEXT POST:
The Problem with China's Steel Industry…Part Two