Two of the (several) fundamental problems of all electric cars is they have limited range and are generally slow particularly if you want to optimize the limited range. Accepted the technology is at an early stage, although electric motors have been in use for a hundred years or more the lithium battery technologies have been in development first for small appliances and more recently for vehicles realistically for some 15-20 years. They will get better but as a Financial Times article observes batteries follow the rules of chemistry rather than the rules of physics that have allowed computer processing power to double every two years. It has taken almost 15 years for the capacity of consumer lithium-ion batteries to double. A kilogram (2.2lbs) of gasoline contains about 13,000 watt-hours of chemical energy of which an internal combustion engine might capture about 4,500 watt-hours. But a kilogram of today’s lithium-ion battery stores only 100 watt-hours of electricity. Cost apart, for the same amount of energy, today’s lithium-ion batteries are 45 times heavier (and 16 times bigger) than gasoline even if lithium-ion makes rapid progress, the theoretical upper limit on the chemistry is between 400-500 watt-hours per kg still only a 10th of petrol and the practical limit is likely to be much lower.

So electric car manufacturers are faced with two (among many) challenges. First, they have to develop batteries capable of storing, releasing and quickly recharging much greater densities of power that is largely a challenge for battery manufacturers and they are pouring millions into research. The other is making the most of what is currently produced by the batteries available. And this is where an interesting project in Japan is showing the way.

SIM-Drive (Shimizu In-Wheel Motor-Drive) a company set up between Toyo’s Keio University and a group of investors including 34 car (including Mitsubishi and Isuzu) and electric power companies to develop the ideas of Hiroshi Shimizu the professor in charge of the research at Keio and now CEO of the company. As the company name suggests the direction of SIM-Drive’s research is in developing electric motors that directly drive each wheel rather than the conventional approach, which is to merely replace the gas engine with an electric motor and largely work through existing drive trains.  Each wheel has its own dedicated electric motor mounted adjacent to the wheel and controlled electronically rather than mechanically. Eliminating the conventional transmission system saves huge amounts of power otherwise lost by gears, shafts and mechanical joints making SIM-Drive’s approach 30-50% more efficient than other electric cars according to this article by the Financial Times. 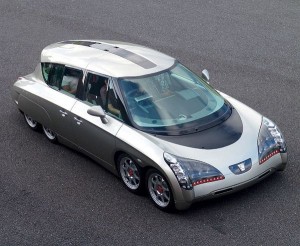 Living up to its futuristic looks the prototype car, called the Eliica (short for Electric Lithium-Ion battery Car), has two significant differences for the user experience from a conventional electric car. First, because there is no front or rear mounted motor and transmission system all the batteries, motors and controls are mounted within the chassis making the center of gravity very low (good for handling) and freeing up everything above the chassis for the passenger cell and luggage. As a result, cars could look fundamentally different with the possibilities more restrained by public acceptance then the limits of no holds barred design options. The second issue, certainly in the case of the Eliica, is in addition to an exceptional (for electric cars) 300 kms (180 mile) range is the performance. According to Autoexpress.com the car is blisteringly quick, in fact faster than a Porsche 911 Turbo with the 8 x 100bhp electric motors capable of accelerating the car from 0-60mph in 4.1 seconds and 0-100mph in 7 seconds in almost total silence. Top speed is 370kph or 230mph in spite of a prototype vehicle weight of about 2.4 metric tons (5300lbs). Production models would be lighter and almost certainly optimized for range, unit cost and a wider sales market than the technology development test-bed that Eliica represents. SIM-Drive believes that with the backing of a major car company bringing mass production techniques and economies of scale they could produce a four wheel version for five people and with a 180 mile range for US$16,500 plus the cost of the battery, which would probably be leased.