Home | Commodities | Where is Tin Going?

Where is Tin Going?

What you may ask is happening to tin at the moment? Okay all the metals have had a sharp sell-off from their highs in January – but not before the market had bid up all the base metals way ahead of what could be considered realistic looking at the fundamentals. 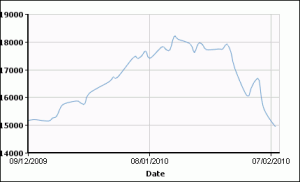 Sure China has been buying most metals in record quantities but not tin. The country is a major producer of refined tin and actually exported 607 tons in the first nine months of the year. Indonesia’s production of refined metal was up 124% in December over a year before and LME stocks at over 27,000 tons are at levels not seen since 2002. In addition, tin consumption in 2009 was down on 2008 which in turn was down on 2007. So consumption is falling, stocks are at a high but guess what? If you want physical delivery of the metal in Europe you have to pay a premium of over US$400 per metric ton according to Reuters.

Well demand may not be booming but solder manufacturers and tinplate producers the two biggest consumers – are enjoying steady business and as prices rose in December and January many stopped buying. As prices have tumbled those consumers and traders in the supply chain have looked to buy spot metal to replace run down inventories causing a short term tightness in the physical market. If LME stocks start getting drawn down we may judge there is more to the physical tightness than it seems but there doesn’t appear to be any real shortage of metal around. We ran a somewhat tongue in cheek article last year on a Mr. Tin supposedly cornering the London tin market and generated quite a lot of interest at the time, but nothing could be proved yet the market has remained strangely tight, at least at the front end. The recent stronger physical demand has done nothing to alleviate this front-end tightness. Fortunately tin isn’t a significant component of the ETF market or investors would be getting caned every time positions are rolled forward. Should buyers rush in to fix forward at these lower levels? We suspect it would be better to just buy what you need and watch the market, much of the sell off has been driven by a flight into dollars and fear of sovereign debt among Europe’s PIGS Portugal, Italy/Ireland, Greece and Spain, of which Greece is by far the worst. That story has some way to run and may well get worse before it gets better. Hedge funds are betting billions on the Euro slipping further and that will be to the dollar’s benefit and further depress prices.

PREVIOUS POST:
Iron Ore Negotiations Kick Off in Asia as CISA Shuns Media
NEXT POST:
Green Police, Audi and What Diesel Means for Platinum and Palladium