Every now and then the idea of airships comes around again. Someone comes up with a new development that seems to open the door to a return of the idea only for it to be dashed by the cold hard economics of competing with relatively low cost established air transport. The very idea of airships has an old world glamor about it that should, one feels, find a place in the modern world alongside the cruise ship industry where the journey is the experience not just a means to arrive at a destination. 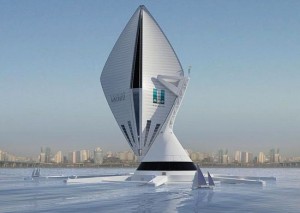 So it is no surprise that the latest project has all the usual magic ingredients: elegance, space, serenity mixed with a few new ones excellent environmental credentials and speed. The Seymour Powell AirCruise “Clipper in the Skies is showcased in conceptual form on a YouTube clip and although the music is a little irritating and at 5mins the clip is rather long it certainly captures the potential of such a craft. Samsung has picked up the original concept and they have commissioned Seymour Powell to produce a detailed design. We think of Samsung as makers of TV’s and domestic electronics but they also have a heavy industries division and are one of the world’s major shipbuilders so they know a thing or two about bringing such projects to reality. The design allows for up to 100 passengers and 20 support staff and crew to be carried at up to 12,000 ft (it’s unpressurized) and at a cruise speed of 90mph. That allows for London to New York in 37 hours or Los Angeles to Shanghai in 90 hours. The craft would be 270 ft high and weigh about the same as an Airbus A380 super jumbo. Like an aircraft, it would be constructed of lightweight materials such as composites and lithium-aluminum and titanium alloys. Hydrogen would be used to create the lift held in four individual containers even though it has been passed over in favor of the not quite so efficient gas helium in airships ever since the loss of the Hindenburg in 1937. Power would be provided by fuel cells drawing hydrogen from a compressed reserve also used to replenish the main lifting chambers if required. The outside of the airship would be covered by photovoltaic cells to provide power and combined with the emissions from the fuel cell essentially just water vapor would create near zero emissions. For those that can afford what would probably be high-end luxury prices, the AirCruise would provide guilt free travel like no other.

Will it become a commercial reality? Sadly it is unlikely, but if it does it will certainly be on my top 20 list of must do’s.