Near bankrupt Eskom, state owned producer of over 95% of the electricity in South Africa has won agreement to increase power prices over the next three years. Although Eskom was seeking a 35%per annum increase, the firm has secured agreement for rate hikes of 24.8% in 2010, 25.8% in 2011 and 25.9% in 2012. Compounded those will double power costs by 2013.Ã‚Â  Unions are up in arms threatening strikes and civil unrest at the impact it will have on living standards but the reality is South Africa has been living in a fools paradise for decades. The country has been subsidizing power at well below global market rates and the result has been almost no investment in new capacity or distribution so that the country now faces frequent blackouts. Furthermore, the cheap power rates have encouraged investment in power hungry industries such as ferro chrome smelting exacerbating electricity demand. According to a Reuters article, Eskom’s average cost is 3 U.S. cents per kilowatt-hour for the past financial year, compared with 8-9 U.S. cents for OECD countries. The South African Chamber of Commerce and Industry said about 250,000 jobs would be lost due to the tariff hike, adding to thousands of other jobs lost during the recession. How accurate this estimate is remains to be seen. Even high energy users like Hellenic FerroChrome don’t think it will be the end of their industry, essentially saying they will just have to pass on the cost increases. According to a Forbes article, last year South Africa produced about 3.4 million tons of the approx 8 million tons of ferro chrome consumed worldwide. As the largest producer, world ferro chrome prices are more likely in the short to medium term to track price increases made by South African producers rather than global consumers finding alternative sources. Even at 6 cents per kilowatt-hour (a doubling of current rates) South African producers will probably be on a par with negotiated rates at western smelters. Their challenge will come from China, where although the cost of power production can be high they do have a precedent for subsidizing power costs when it suits them.

Samancor Chairman Danko Konchar said South African ferro chrome production costs are US$0.90/lb, with power charges currently accounting for 20%. High carbon ferro chrome prices have been rising steadily during 2009 as this chart from Metal Pages shows and last month were at around US$1.03/lb in Europe and $1.05-1.08/lb in the US; they look likely to continue rising in 2010. 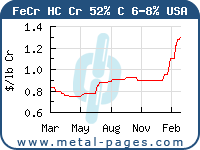 Other power hungry industries such as aluminum have already felt the heat of power restrictions as smelter output has been cut back and new projects have been indefinitely postponed. The biggest risk to South African industry is probably with the struggling mining sector where falling ore grades and a strong rand have made many operations only marginally profitable.