As we have all read many times, China’s economy is highly dependent on exports and the country’s balance of payments surplus results from China exporting considerably more than it imports. Exports were badly hit on the 2008/9 global recession and China is estimated to have lost some 20 million manufacturing jobs in the downturn. So it is interesting to see that container freight rates on the Asia-Pacific and Asia-Europe routes are picking up and that container TEU’s have increased through Shanghai, Hong Kong and Shenzhen in December after months of declines. According to a Reuters article, The China Containerized Freight Index (CCFI), which takes data from most of the leading lines with operations in China, hit 1,168.31 points for the week ending Feb 26. The index has gained about 45 points from Feb 12. At the end of February, it was as high as 1,200 points and its record high was 1,255 points set in October 2004. The index started in 1998. 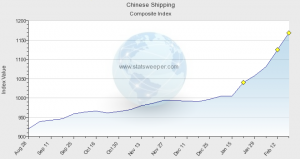 A spike in demand for goods made in China at the end of last year added an additional impetus and certainly freight rates were boosted by a cargo rush before the Chinese New Year. Yet even so this seems part of a longer running trend. China saw its exports grow 17.7% in December and 21% in January and this is creating both a shortage of containers in China in which to load materials and rapid rate increases in the spot markets as agents scramble to get space for their cargoes. The slow sail policy of shipping lines on which we wrote last week has only exacerbated the problem as vessels and containers are tied up longer on voyages than previously the case. The biggest cause of the shortage of space and hence rate rises is undoubtedly that some 10% of the world’s container vessels are mothballed and idle in river estuaries or fjords awaiting a sustained come back in demand.

It would seem shipping lines are not in any hurry to bring capacity on-stream – the rise in rates has reversed the position of losses sustained in the first half of 2009. Neptune Orient Lines of Singapore says it carried 63% more containers in January than a year earlier, mirroring comments from other lines. OOCL has said it will impose a general rate increase, a restoration rate program and a peak season surcharge on various routes within 2 months. CMA, the French line has announced similar increases effective from March.

About 75% of container freight rates for trans-Pacific routes are under contracts that probably would not be subject to the increase in spot rates until the contracts expire, usually in May, analysts said. But spot rates have already seen massive rises as this article in the Telegraph explains. Last February 2009, the cost of shipping a 20ft container from China to Europe was around US$300, the lowest freight rate for a decade. Last week, by comparison, mainland China’s largest shipping company, Coscon, said that rates for a 20ft TEU had risen to $1,400, plus a $510 bunker adjustment surcharge, an increase of more than six times.

It is possible now that the pressure of the Chinese New Year deadline is out of the way rates may ease a little but anyone on a contract due for renewal this spring should budget for higher rates and those who thought the recent spike was a temporary phenomena should budget for rates being well above 2009 averages going forward. Having gained higher rates from the market, shipping lines will not be inclined to rush capacity back too quickly and risk seeing premiums slip away.