If Cap & Trade is Dead What is Next?

Cap and Trade is dead, so says Sen. Lindsey O.Graham, and he is probably right. It has been held up in the House for 8 months and is proving widely unpopular. So in an effort to break the deadlock, Sens. Graham, Kerry and Lieberman have worked to introduce an alternative cross party proposal. The plan outlined in the Washington Post is broadly to apply different carbon controls to individual sectors of the economy instead of a national target. Three major sources of emissions are identified electric utilities, transportation and industry.

Power plants would face an overall cap on emissions that would become more stringent over time; motor fuel may be subject to a carbon tax whose proceeds could help electrify the U.S. transportation sector; and industrial facilities would be exempted from a cap on emissions for several years before it is phased in. The legislation would also expand domestic oil and gas drilling offshore and would provide federal assistance for constructing nuclear power plants and carbon sequestration and storage projects at coal-fired utilities.

You can see the attraction for lawmakers. Vested interests can be readily exempted, industry is taken out from the start and the total cost can be pushed onto the consumer in the form of higher power tariffs and gas prices.   Needless to say even then there is huge opposition from those that see their sector potentially impacted by taxes that may reduce demand. For example, the American Petroleum Institute has been running television ads during the Olympics saying, “Americans say no to raising energy taxes although I doubt any Americans have been consulted prior to the ad running they probably are broadly correct.   One novel approach that has been suggested to persuade wavering supporters is to include giving money raised through carbon pollution allowances directly back to consumers, a scheme known as “cap-and-dividend”. That is more likely to appeal to the hard-pressed taxpayer and consumer yet would still fulfill the intent of pricing energy sufficiently high to force better choices to be made.

While we at MetalMiner generally wear the lens of manufacturing consumer and as such are pleased to see industry being exempted from any tax raising plans we can’t help asking how effective any system can be if you exempt one of the largest sources of emissions?

As the following chart shows, Electricity and Transport are the two largest sources of CO2 emissiosn, figures from the EPA.

But electricity, though produced at power plants, is ultimately consumed in the other economic sectors. When emissions from electricity are distributed among these sectors, the industrial sector accounts for the largest share of U.S. greenhouse gas emissions. Transportation remains the second largest contributor to emissions as illustrated below.

Which shows that carbon emissions are not a simple equation, production and consumption is interlinked and even if industry is exempted at the production stage it will be impacted at the consumption stage by higher power tariffs. If industry is somehow exempted from taxes applied to electricity supply then the legislation doesn’t have a hope of fulfilling it’s objectives.

To be fair, many metals industries have made huge strides in reducing their emissions over the years as this chart reproduced from EPA data shows: 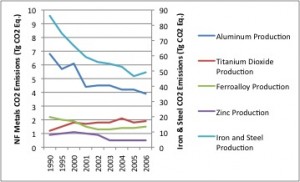 How successful the senators new legislation will be remains to be seen but with so many vested interests seeking to exempt their sector from any impact we suspect it will face the same uphill struggle as the original proposal.